"Good evening, I bid you welcome. Welcome to the newest feature in the legacy of Count Dracula." - The Usher

Dracula: Legacy in Blood was one of the eight haunted houses that were featured during Halloween Horror Nights: Ripped from the Silver Screen. The house revised the classic horror story of Count Dracula. It was one of the three classic monster trilogy houses, the other two being The Wolfman and Frankenstein: Creation of the Damned, all three of which were built in Universal's soundstages. It was located in Soundstage 23 along with Frankenstein: Creation of the Damned.

In 2009, Universal decided to have three haunted houses based on the Universal Classic Monsters, one of which was Dracula: Legacy in Blood. This haunted house would be based in Dracula's Castle and would mostly focus on his Brides instead of Dracula himself.

2009 was the first year Universal decided to give codenames to all of their haunted houses. Some people say the codename was "Fangs", because Dracula has fangs, while others say it was "Agana" as she is Bloody Mary.

The house would be one of two located in Soundstage 23, the other one being Frankenstein: Creation of the Damned. Soundstage 23 is one of the larger soundstage facilities designed to be used as filming locations for movies and television shows.

Originally, there was going to be a giant winged Dracula that appeared at the end of the house, but because of budget he was scrapped.

The house tied in to a story on the Halloween Horror Nights website, Bloodless. In it, a bride gets hypnotized by Dracula and drained of blood. The house would go on to win the House of the Year award for 2009. A Dracula prequel house based on the Dracula Untold prequel movie would be featured during Halloween Horror Nights 24. It would be called Dracula Untold: Reign of Blood.

Welcome to Castle Dracula on the night of “The Calling.” Vlad Dracula bids you welcome – be you one of the chosen women who has been called or merely a mortal man. Those who have been chosen must decide whether to join the Dark Prince in everlasting life as his brides, or reject his offer and suffer for all eternity. The blood must be renewed. The fate of the legacy hangs in the balance – Dracula’s legacy of blood.

Vlad Dracul has chosen you – now you muse decide whether to join the Dark Prince in everlasting life or reject his offer and suffer for all eternity.

During the premiere of a remake of a certain film, patrons claimed to hear a female voice quoting the lines of the movie word-for-word. Days later, the staff found the body of a young woman clad in a wedding dress behind the balcony's last row of seats, her hands still clutching a bouquet of wilted roses.

The bride-to-be had apparently gone missing on her wedding day though police admitted they were slow to respond as they thought last minute jitters gave her second thoughts.

The coroners reported that the cause of death was a fatal loss of blood, though the strange part was there were no traces of blood found around the body nor on the victim's clothes. Even stranger, the flowers she held showed no signs of decomposition, as if they had been "frozen in time".

Guests would enter the queue to the right of the entrance for the Twister attraction. The queue would go through the line for the Twister ride and towards Soundstage 23, where guests entered the house.

Guests entered the cold, foggy Eastern European castle grounds. Dozens of victims were impaled on stakes in various stages of decay. A dinner table is set up under the bodies, but whoever had been eating there apparently left already.

Inside the door, Dracula and his beautiful brides attacked from side hallways before guests moved into a long hallway. Brides lined the hallway, bursting out from behind the curtains with loud screams and colored strobes. They would then move outside to the top of the castle wall, where a bride reached down from a window above. The next room had the insane Renfield, a mental patient who serves Dracula in return for insects and small animals to eat.

Guests entered the library, with long hallways of shelves and shields that boxed you in. Several brides were hidden in alcoves, and a bride floated above the victims, twirling above shelves.

Next were the catacombs under the castle, with tunnels that seemed to stretch endlessly into the distance. Several brides hid in the tunnels, while one was hidden in a small hole next to the line. From there, guests would pass by coffins filled with skeletons. One hid one of Dracula's feral brides, horrifying creatures that lived only to eat.

As guests passed by several bodies hanging from hooks (with a feral bride hiding behind them), they would enter the final room. A massive spiked press was in the middle of the room, ready to squeeze the last drops of blood from drained body parts. Several feral brides attacked amidst multicolored strobes. As guests ran for the exit, Dracula, transformed with a bat-like face, leapt from behind a red curtain with a roar.

Photo from the owner of HorrorNightsCollector.

A picture of some of the concept art of Dracula: Legacy in Blood. Photo from the owner of HorrorNightsCollector.

Tippi Hedren from The Birds with some of Dracula’s Brides. 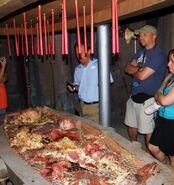 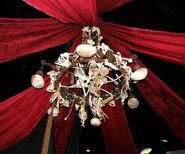 From robbalvey on the TPR Forum

From Dick Johnson
Add a photo to this gallery

HHN 19- Dracula walkthrough
Add a photo to this gallery

Retrieved from "https://halloweenhorrornights.fandom.com/wiki/Dracula:_Legacy_in_Blood?oldid=108682"
Community content is available under CC-BY-SA unless otherwise noted.