Dollhouse of the Damned was one of the eight haunted houses that were featured during Halloween Horror Nights 24. It was located in Sprung Tent 1.

On August 12th, 2014, Universal announced that an original haunted house based on an evil dollhouse filled with many evil toys would be featured at that years Halloween Horror Nights event. The codename for the house was "Charlie", as there was an actor named Charlie who used dolls.

In 2006, Universal built two hurricane-proof tents behind the World Expo area of the park specifically for holding Halloween Horror Nights haunted houses. This house would be located in the southernmost one (called Sprung Tent 1). The house would prove to be very popular, and would co-win the House of the Year award in 2014 with Halloween.

Within the decaying walls of this house awaits something evil. The unfortunate souls that enter here will become the damned that never escape.

The facade is a giant Dollhouse with a bunch of doll parts scattered around. When you enter, you come into a room full of handmade dolls. There is a woman dressed in a Raggedy Ann doll costume that has been sliced in half. She serves as a distraction, as a burlap doll jumps out at you. Next, you enter a nursery where baby dolls reach out at you from within cribs. Then, you enter a room where a nurse is cutting off a mans feet. After that, you enter a sort of hunters cabin with various stuffed animals on walls (the most notable of which is a Teddy Ruxpin bear). A hunter bear jumps out at you and another jumps out of the fire place. Then, you enter a freezer, where a woman with the head of a doll shoved in her mouth says "Make you pretty" while stroking a doll. While you are looking at that a camouflaged actor in a pile of dolls jumps out. Then you enter a room filled with dolls with their necks snapped. A scareactor jumps out in the corner with a slit throat. As you exit the room a ballerina wearing a doll mask jumps out behind a curtain. Next you enter a room with ventriloquist dummies holding onto dolls with a person who runs out of a corner. The final room is an oval shaped room with giant baby faces over multiple fake doorways with scareactors lunging out at you. 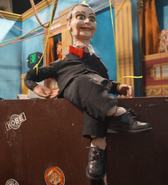 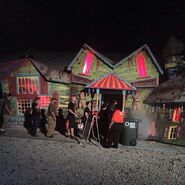 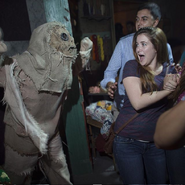 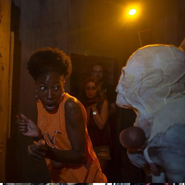 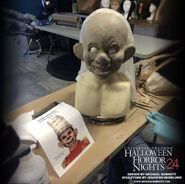 Retrieved from "https://halloweenhorrornights.fandom.com/wiki/Dollhouse_of_the_Damned_(Haunted_House)?oldid=117000"
Community content is available under CC-BY-SA unless otherwise noted.