Disorientorium was one of the seven haunted houses that were featured during Halloween Horror Nights XIV. It was located in the Carnage Warehouse. The house was a roadside attraction that drove tourists mad. The most notable tourist was named Jon.

Universal decided to have another disorienting haunted house for their 2004 event. This house would be titled Disorientorium and would feature a roadside attraction built to confuse guests. Unlike the disorienting house from the previous year (Funhouse of Fear) this house would not feature the 3D gimmick.

From moving walls to spinning floors, you won't be able to tell sanity from madness.

Here hours stretch and reality blends, up is last and everything bends. Front is left and back is night, day is dark and noon is right. The walls are doors and sound is sight where white is dark and black is bright. Straight around the next curved squares, on first last bottom top three stairs, bitter scents are terrible sweet, hearts are tails and heads are feet. Way up slow beneath the loft, far away close is hardly soft. And you always choose and you always win... and you never leave the way you came in.

Disorientorium is a road-side attraction described as being like "bungee-jumping for the mind". The attraction was designed to disorient guests, and would be very similar to fun houses. However, the attraction was known for causing terrible side effects. Patrons would sometimes loose their senses and suffer from nausea. People who suffer from hallucinations and susceptibility to psychedelic stimuli were advised not to enter the attraction. One of the notable "victims" of this attraction was a man named Jon.

Jon was a reasonably successful accountant with a fiancee and lots of friends. He would leave messages on his phone detailing the experiences he had with his clients. On July 13th 2004, he met with the owner of Disorientorium Inc. to discuss bookkeeping audit procedures. In his first message detailing his experience with Disorientorium, he mentions how unusual and intriguing the company was. He ended the message by saying he would visit the premises next week.

On July 20th 2004 at 9:00 PM, he left his next message. Jon describes how he toured the attraction with the manager and owner, and ended up enjoying himself much more than he thought. He ends the message by saying he will try to go back again soon. His third message was written on August 3rd at 8:30 PM, and said that he had gone through the Disorientorium attraction for the sixth time that day, as he could not get enough of the place. The owner gives him two complementary tickets to spend time at the attraction with "a special someone". However, Jon decides to keep the tickets to himself. He ends the message questioning his decision and the fact that his hands are shaking.

In between his third and fourth messages, his fiancee becomes increasingly worried about his behavior. She decided to write Jon a letter returning the ring and calling off the wedding. She describes that she did this because he has changed ever since going to Disorientorium. He's let his accounting business slip into complete chaos and doesn't care. She then goes on to say that he is in a dazed mood all of the time, that her parents think that he is having a breakdown, and that their friends are all talking about his startling appearance. She ends the letter pleading to Jon to get psychiatric help.

Jon received the letter and the engagement ring on August 14th. That same day at 9:00 PM he wrote his fourth message. He is angry because no one seems to understand his love for Disorientorium. He mentions rescheduling his appointment with Mannarino Corp. and how he is not going to work that day because he feels dizzy, has body aches, has unbearable headaches, and can't see straight. He decides to take the bus to Disorientorium because he can't drive. He ends this message by saying that he feels better when he's there.

His fifth message was written on August 28th, 2004 at 10:30 AM, and has blood droplets on the screen. He randomly adds extra letters to his words, showing his increasing insanity. He mentions in this message that Disorientorium was closed, so he broke in. Jon says that he must always be there, that all of the answers are in the attraction, and that everything will be fine. He ends this message by saying his nose won't stop bleeding. His sixth and final message was written on September 6th at 1:30, and is complete gibberish. Discernible words include "Deep", "Sees All", "Nothing Matters", "Here", "Mind", and "Disorient". The screen also has a large crack in it. Jon was later sent to a mental asylum, presumably Shadybrook. The records of his experience were kept in a box in one of the rooms of the asylum.

In the Patient Records on the Halloween Horror Nights XIV website, visitors could see the contents of the box detailing the story of Jon. They could click on and read a brochure advertising Disorientorium, a phone in a wallet (which also contained a note) to read Jon's messages, and his fiancees letter with his engagement ring on it. Also on the website was a calculator with the letters "DISODISO" written on it, multiple bitten and broken pencils, a few batteries, and a coffee stained Disorientorium napkin with a broken pencil, a few paper clips, and a battery on it. The coffee stain and objects on the napkin were shaped like the Point of Evil symbol, and when clicked on would take visitors back to the main page of the Patient Records.

In the house, guests would enter the Disorientorium attraction, and would discover what made Jon slowly go insane. 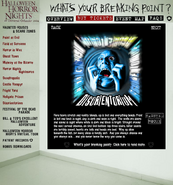 Images are from the Halloween Horror Nights XIV website until otherwise noted. 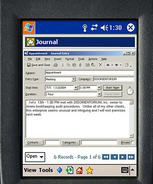 A picture of page one of the phone messages.

A picture of page two of the phone messages. Photo from HHNYearbook.com. 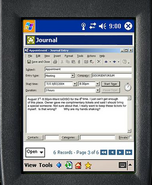 A picture of page three of the phone messages.

A picture of page four of the phone messages. Photo from HHNYearbook.com.

A picture of page five of the phone messages. Photo from HHNYearbook.com.

A picture of page six of the phone messages. Photo from HHNYearbook.com.

A picture of the letter that was on the website page for Disorientorium. Photo from HHNYearbook.com. 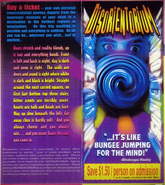 A picture of the brochure that was on the website page for Disorientorium. Photo from HHNYearbook.com.

Image from the Halloween Horror Nights: Sweet 16 website.
Add a photo to this gallery

Guests would enter the queue near the entrance to the Doctor Doom Fearfall ride. They would follow the queue all the way to the Carnage Warehouse, where they would enter the house. This is unconfirmed, but allegedly the queue went through the marketing area, and prop storage of DISO. Inc. The queue video showed trailers of the attraction and a greeting from Jameson Disorientorium, owner and creator of the attraction. In the queue, there were a few allusions to the fact that this house takes place in the Marvel Universe (as the house was located in the Carnage Warehouse). There were several ads for the Daily Bugle, and a wanted sign of Electro.

Guests would eventually reach the facade, which was a black and white building with spirals and "Disorientorium" written in colorful letters. After going through some silver curtains, guests would enter the house.

(From the now defunct IOACentral.com)

You enter this maze through a spinning vortex tunnel. The tunnel turns slowly, and has a very disorienting effect on you, causing you to feel a bit dizzy. Next, you enter a dark hallway, where the walls literally try to suffocate you. This is due to air tubes that are in the walls. After making it through this hallway, you enter an ink blot strobe room. The strobes are heavy here, and actors dressed as inkblots, who blend in well with the room, pop out at you, causing you to feel alarmed. Next, you enter a room where there are neon color balls all over the walls, and hanging from the ceiling. Camoflauged actors jump out at you and scream, which was quite disturbing. Next, you enter a room where there are paint splats all over the walls. There are mannequins here, and actors dressed just like the mannequins, who run at you and scream. Next, you enter a sparkling mirror room, which is very confusing. You then enter a mirror maze, much like the one from last year's Funhouse of Fear. The maze is confusing, and you bump into glass a few times as you try to find your way out. There are Treaks and Foons in this portion of the maze. Is that one way down there, or is it right next to you? The mirror trick is effectively used here. Finally, you enter a hallway with red, white, and yellow silk sheets on both sides. Actors dressed like birds jump out at you from both sides. Finally, you escape from this maze.

(From an Unknown Source)

The opening scene was a spinning tunnel filled with stars. Exiting the tunnel, guests were dizzied and confused, open for a scare from a camouflaged scareactor. Then, was a mirror scene featuring the Treaks and Foons. The finale scene was a narrow tunnel in which scareactors popped out from all sides. Other rooms included black and white walls (and one with black and green walls), a room with paint splatters all over the walls, and a room with reflective walls. Strange bird people appeared in one room of this house. The tunnel was said to return at the end of the house and it was said that the final room had guests crouch down through a tight tunnel while scareactors reached at them from all sides.

Part of the line for Disorientorium. Photo from the now defunct ioacentral.com.

Photo from hhncast.com
Add a photo to this gallery

Retrieved from "https://halloweenhorrornights.fandom.com/wiki/Disorientorium?oldid=91572"
Community content is available under CC-BY-SA unless otherwise noted.