Depths of Fear was one of the ten haunted houses that were featured during Halloween Horror Nights 29. It was located in Sprung Tent 2.

On May 21st, 2019, Universal announced that a haunted house based in an underwater mining facility that gets attacked by sea creatures would be coming to their Halloween Horror Nights event that year. The codename for this house was "Pressure", a reference to pressure increasing the further you descend into the water.

A mining corp built an installation in deep waters infested with something monstrous. There is no escape from your watery grave.

PLUNGE INTO A NIGHTMARE

A deep-sea mining company has established an installation in the darkest reaches of the ocean to extract valuable resources. But the waters are infested with something monstrous.

Parasitic creatures known as Mouthbrooders slither inside the mining equipment and spew their acidic eggs upon unwilling human hosts. You're paralyzed with horror as the infected are quickly driven to violent madness. The pressure is building. Implosion is imminent. The creatures are everywhere.

There is no escape from your watery grave.

The workers of a deep-sea mining company have found themselves in a dire situation. They’ve delved too deep and encountered a parasitic race of creatures that turn out to be deadly. Panic ensues as you find yourself encountering infected miners and acidic creatures. The pressure builds as the self-destruct sequence counts down to the inevitable implosion of the facility and the crew's dog, Max, suffers his ultimate fate.

As you venture further into the depths, you’ll encounter the creatures known only as the “Mouthbrooders.” Picture being trapped in a claustrophobic mining installation underwater with a countless number of these slithering monsters. Your worst nightmares will come to life as these fiends spew flesh-eating acidic eggs at human hosts, and you witness miners being driven mad by the infection.

The queue entrance was located to the right of the Men in Black restrooms. It went down a road that led to the front of Sprung Tent 2 where it would then continuously loop around the side of the Men in Black building. Eventually you would reach the facade, which was a giant vault that says "Fathomcorp" in large letters, with two large storage containers next to it with a sign saying "Safer, Renewable Energy".

Entering the vault, guests would be blasted with air and see a series of screens detailing the creatures. In it, the captain of the mining area talks about the Mouthbrooders (how he killed one, how they spit acid in peoples faces to lay their eggs, how they possibly killed an employee named Sarah, and how there are more then one). Eventually, the countdown to the implosion starts playing and the captain freaks out, saying that they need more time to escape. Before he can do anything, he gets attacked by one of the infected miners. Guests would then enter the house.

The following room featured a med bay, where a stiltwalking Mouthbrooder (later removed) would run down a hallway towards guests while an infected miner jumps out next to him. Further into the room, guests would encounter a miner whose face has been burned off by some steam and a security guard who escorts guests into the direction of the escape pods. However, at the end of the room, a Mouthbrooder comes out from behind a lift and sprays acid in the guards face. Afterwards, guests enter a room with flowing water on the left side, and a Mouthbrooder (later replaced with an infected miner) on the right. At the end of the room, guests would see a corpse on a ladder, with a Mouthbrooder jumping out from a dropping panel (later removed) across from him.

Guests would then enter a room full of portholes, with projections of infected miners trapped in the water. In this room, guests could also see windows, showing the outside of the base (water) and a Baby Mouthbrooder attacking on the right. Guests could also see a corpse cut in half hanging over a large hole by a ladder, and a catwalk up above with a corpse in it. At the end of the room, a miner jumps out and orders you to go to the escape pod while she covers you. The next room featured many escape pods, with Escape Pod 1 being locked, Escape Pod 2 having a Mouthbrooder in it, and Escape Pod 3 having the corpse of the dog, Helix, cut in half by the door. Along this room, guests walk across the bridge that seems to be very high, up above a large, seemingly endless pit. Guests then approach Escape Pod 4.

Entering Escape Pod 4, guests would soon realize that the escape pod is broken beyond repair, with holes in the wall (two of which have infected miners hiding in them, the first one originally being a Mouthbrooder who was later replaced), bunches of eggs hanging on the ceiling, and all of the chairs being filled with infected corpses. Accepting their fate, guests walk back into another room as the implosion is about the occur. In front of them, a Mouthbrooder runs at them in front of a spinning red light (representing him running from the implosion) as another infected miner attacks from the right. At the end of the house, guests are attacked by another Mouthbrooder (later replaced with an infected miner) before exiting the house. 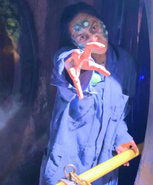 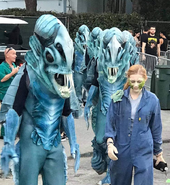 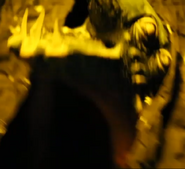 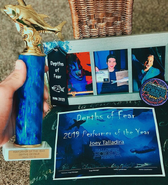 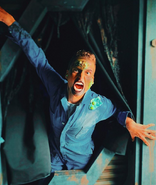 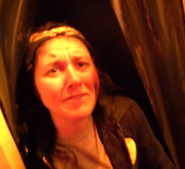 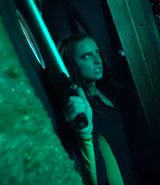 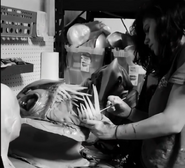 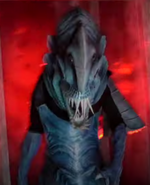 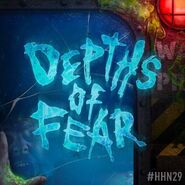 Pillage
Add a photo to this gallery

Retrieved from "https://halloweenhorrornights.fandom.com/wiki/Depths_of_Fear?oldid=113622"
Community content is available under CC-BY-SA unless otherwise noted.