Demon Cantina was on of the seven haunted houses that were featured during Halloween Horror Nights: Tales of Terror. It was located in The Carnage Warehouse. The house was a biker bar located in Blood Thunder Alley.

For their 2005 event, Universal created their own demented country that runs on blood and sacrifice. One of the houses they chose to have at the event was a house loosely based on the 1996 Dusk Till' Dawn Film. The house would take place in a biker bar where demonic bikers eat flesh and drink blood.

This would be the final year the building was used to hold a house, as the Halloween Horror Nights event moved from Islands of Adventure to Universal Studios Orlando.

The dead are living it up in this biker bar from Hell, and when they ask you to join them, it's the end of the road for you.

Mankind tempts fate if any one is foolish enough to step inside the Demon Cantina, flagrant trespass on the turf of the ferocious Bone Choppers of Ironbone Gorge. Celebrating their own last Season of the Queen, the meanest of the Queen's Black Guard enlist chainsaw-wielding maniacs to provide entertainment and seductive creatures to supply amusement... and all take one last taste of sweet warm Bloodberry wine.

In the heart of Iron Bone Gorge, stood a cantina where all of the Bone Chopper Riders would get together to have a drink of Bloodberry wine, a highly addictive liquor made from the Bloodberry Fruit. They would drink the wine using goblets made from old Terra Blades. The cantina was ruled by demons and other creatures, who would hunt any humans who were tempted to enter.

On the map of Terra Cruentus found on the Halloween Horror Nights: Tales of Terror website, visitors could click on and view the Iron Bone Gorge region of the map. There, they could access the website page for Demon Cantina by clicking on a goblet. The page showed a table in the cantina, with various items on it. Visitors could click on and read a poster advertising the Season of the Queen and the Blood Creed of the Cantina Demon, which said that to the Cantina Demons anyone besides the Terra Queen are forced to serve her needs. The website also had a radio, where visitors could listen to clips of the songs Sympathy for the Devil by the Rolling Stones, Bat out of Hell by Meatloaf, Devil Woman by Cliff Richard, and Highway to Hell by ACDC. Finally, visitors could click on a goblet to listen to a short audio clip.

Images from the Halloween Horror Nights: Tales of Terror website until otherwise noted. 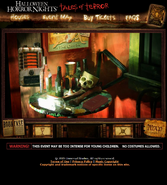 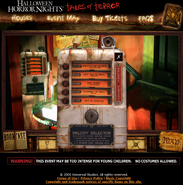 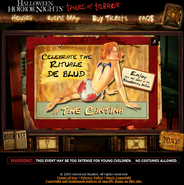 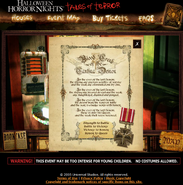 Song that played on the Backstory Page: Descent into the Depths by Midnight Syndicate

Audio that played when the Goblet was clicked on in the Backstory Page:

Guests would go through various rooms of a bar, occupied by various demons that inhabited Blood Thunder Alley.

Retrieved from "https://halloweenhorrornights.fandom.com/wiki/Demon_Cantina?oldid=114006"
Community content is available under CC-BY-SA unless otherwise noted.