When Universal Studios Hollywood revived its annual Halloween Horror Nights after a long break starring Pavel Pranevsky as the main advertising mascot, John Murdy and The Team Behind the Screams made a scarezone similar to an attraction from its rival Knott’s Scary Farm.

One of the “films” scripted by the Director who was evading ban involved the dead of the Wild West haunting the Streets of their native soil.

Ghost town where skeletal inhabitants of the town's most notorious still roam the smoldering streets. 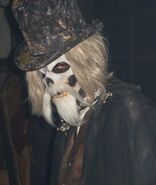 Add a photo to this gallery
Retrieved from "https://halloweenhorrornights.fandom.com/wiki/Deadwood?oldid=104676"
Community content is available under CC-BY-SA unless otherwise noted.