Deadtropolis was one of the seven haunted houses that were featured during Halloween Horror Nights XIV. It was located in the Earthquake Queue.

The house was located in the large extended queue for the Earthquake attraction in Universal Studios Florida, an area used to hold haunted houses since 1994.

The house would receive a sequel scarezone in 2006 titled Deadtropolis: Zombie Siege.

Something went wrong... terribly wrong. Genetic engineers bent on unlocking the secrets of longevity instead unlocked a Pandora's Box of horror. There is a fate worse than death and it is quarantined in a cityscape that has been named DEADTROPOLIS..where the undead roam in search of the living and the living cower and hide in fear of their lives.

Fresh meat. That's all you are in this urban nightmare where the walking dead feast upon the living.

Alongside the myth that a person can die in real life if they die in their dreams, ancient civilizations and research groups hypothesized that Dreams (particularly nightmares) can sometimes be prophetic images of events to come. One account found in Shadybrook Rest Home and Sanitarium can attest to this.

In a patient box there was a letter sent by an unnamed 28 year old woman who worked for Simmons Grebb that was supposed to be addressed to her mom. She accounted in the letter that she was suffering from puzzling dreams which her psychiatrist theorized were a “Subliminal Reversal” of the perfection she was aiming for her job (presumably city planning)- while it can be assumed she aimed to be neat and tidy while designing artwork for city planning, in her dreams she saw them visualized in haunting images of decomposition and decay. When she woke up from these dreams she would sketch out her visions, one of the sketches featuring a strange shadowy figure. As the days went on her visions became more and more intense. She tried eating different foods and taking different medications but nothing worked.

At the end, she mentions that she clipped a article that seemed to hold the answer to the nightmares she was having. Apparently there was new controversial research being conducted in various hospitals where they would alter DNA with animal protein combinations, for some sort of longevity research that was supposed to help with radical surgeries and the recovery process of deadly diseases. This caused a storm as the protein combinations were untested; some accused those involved of being Frankenstein wannabes. One such incident reported that a seemingly dead 53 year-old man showed vital signs... and then vanished.

Soon after a zombie outbreak occurred. The city of San Francisco was quarantined and renamed "Deadtropolis". As it turns out, the woman's dreams predicted the oncoming apocalypse. Some time later, the woman was sent to an asylum, most likely Shadybrook. The records of her experience were kept in a box in one of the rooms of the asylum.

In the Patient Records on the Halloween Horror Nights XIV website, visitors could see the contents of the box detailing the story of the Horror Nights Nightmares patient. They could click on and read the patient's letter to her mother in an opened envelope, the article detailing the controversial research that led to the zombie apocalypse, and a sketch book featuring three of the patient's sketches. Also on the website was a roll of tape, a sketch of a quarantine zone, three pens, a measuring stick, and an additional drawing of a strange symbol. The symbol in the last drawing was that of the Point of Evil, and would take visitors back to the main page of the Patient Records when clicked on.

In the house, guests would enter the now quarantined San Francisco and take a journey through the zombie apocalypse. 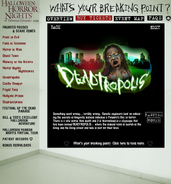 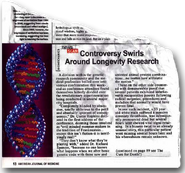 Concept art for the facade of Deadtropolis. The rest of the images are from the Halloween Horror Nights: Sweet 16 website.

Deadtropolis Concept Art with notes from The Director.
Add a photo to this gallery

Guests would enter the queue near the entrance to the Earthquake ride. The queue would lead towards the extended queue for the Earthquake attraction. Guests entered the house through a quarantine. The queue videos (seen on many television screens that line the border of the contaminated zone) were messages from a news anchor.

"This is breaking news on Channel 6. A large portion of the metropolis area has been quarantined after the spread of a deadly virus. The contaminated section, being called "Deadtropolis" is classified as a Dead Zone 9 and is highly dangerous. As far as we can tell, the virus has not spread past the borders, and we at this news station are safe and will remain safe enough to bring you constant news as this story develops..." ---static--

You have just walked unknowingly into "Deadtropolis"! Other televisions (apparently security cameras) play scenes from gory movies of zombies and other disgusting beasts. In a moment you will enter the darkness of this city and confront these horrors yourself. After passing under the "Dead Zone 9" warning sign, you make your way around a crashed car and a dumpster and enter a garage.

(From the now defunct IOACentral.com)

Outside of this maze, there are tvs showing bloody, gory scenes, which depict zombies attacking humans, and humans turning into zombies. You enter the maze beneath a DEAD ZONE 9 sign. A van is parked in a garage, and a zombie runs around it and reaches for you. Another zombie jumps out from a door in the garage, and sprays you with a strong burst of air and water. Next, you enter a disgusting bathroom. A zombie jumps at you from a corner, and you see a zombie vomiting in a toilet. Be careful here, as there's a zombie who pokes his head into the bathroom and tries to vomit on you. You then go outside into an area where there are dumpsters and clothslines. Zombies attack you from both sides as you make your way through this area. Next, you enter the hallway of a house, where zombies are behind mostly boarded up doorways. The zombies reach at you through the small openings, and one zombie even sticks his whole body through an opening, and tries to prevent you from leaving the hallway. A zombie girl is sitting on the floor in one of these areas, clutching a teddy bear, and rocking back and forth. You then enter a kitchen, where a zombie jumps out at you from the left. Further in, you see an old lady sitting in a rocking chair. Her daughter runs at you, screaming: Help us!. The old lady also reaches for you. You then escape into a u-turn walkway, with metal and plastic is hanging over the metal. Zombies reach for you through the fence. Next, you enter a church, where a zombie reaches for you while laughing maniacally. A couple of other zombies try to block your escape. You then walk through a China town area, where a Chinese zombie reaches for you. Next, you enter a shaking, rocking subway car, where the lights blink quickly, and zombies reach for you from both sides. After this, you are in a back alley of the metropolis. A couple of zombies run out from behind trash cans and bang on them, yelling at you. Finally, you escape from deadtropolis by running through a short tunnel, where water drips on you, much like the effect from last year's Ship of screams. After exiting this tunnel, a final zombies scares those who thought they were finally safe.

(From an Unknown Source)

In this garage, a minivan sits quietly with its hood up. One zombie ambles around the van trying to fix it while another monster dashes into the garage from the left side door. Hub caps line the walls. A doorway at the back of the garage leads into the bathroom of this urban household. A toilet, a sink, and other props sit in this tiled room, but near the back of it look out for the zombie that sticks his head through the wall and vomits on passing guests.

A turn to the right takes you into a large, open room with hanging sheets, dumpsters on either side, and a catwalk above from which another zombie scares guests below. Entering back into a household hallway with doors revealing more zombies, you are taken to the kitchen. Look for the dead rat on the counter! A television displays only static in here, and an old grandmother rocks in her rocking chair as a zombie apparently raids her pantry (and scares guests as well). A doorway in the kitchen leads to a strange u-turn walkway surrounded by metal bars and plastic sheets - some sort of quarantine setup. A zombie rustles behind the translucent sheets.

This walkway leads you a dark part of the metropolis where bums lay on benches, and brains lay on the picnic table. Stained glass windows make up the right wall of this scene. Next, you enter a more brightly lit portion of the city, Chinatown. Lanterns hang from above, and a Chinese zombie moans and bangs against a fence on one side. A quick turn takes you right into a car on a moving, shaking subway! Zombies in business clothes try to grab you through the windows as you walk down the center of the flashing, rocking car. A dark tunnel leads out to the outside portion of the house. Trash barrels and junk dot the path, and wandering zombies stalk passing guests.

A trip under the final short tunnel ends the house, but during this last second, heavy drips from above (blood?) get visitors pretty damp. One final scareactor would appear at the end of the house saying that guests survived the house. He then goes on to say that even though they survived they were infected by the zombie plague.

Photo from the now defunct universal-excitement.com. 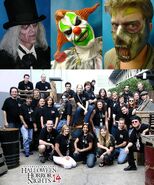 Part of Deadtropolis (on the bottom). Image from Michael Burnett on Twitter.

Credit to Criticalanalysis
Add a photo to this gallery

Retrieved from "https://halloweenhorrornights.fandom.com/wiki/Deadtropolis?oldid=116829"
Community content is available under CC-BY-SA unless otherwise noted.