Creatures! was one of the eight haunted houses that were featured during Halloween Horror Nights: Reflections of Fear. It was located in Soundstage 22.

In 2008, Universal decided to make a haunted house based off of the 1981 movie, An American Werewolf in London. However this idea was scrapped and instead replaced with an original haunted house.

In 2008, Universal decided to tie in all eight of their haunted houses to patients of Bloody Mary. This haunted house would tie in to Johnny Deedle. He had a fear of an octopus-like creature living under his bed. He visited Bloody Mary so she can cure his fear, but she instead killed him by tying a noose around his neck.

The house would be titled Creatures! and would take pace in a redneck town where a meteor crashed. An octopus-like alien emerged from the meteor and started wrecking havoc on the town. A few of the town's inhabitants decided to fight back.

Originally, there was going to be a giant creature prop featured at the end of the house. However, due to the creature not being able to fit in the door of the soundstage, the idea was scrapped. The house was also said to originally be based on the movie An American Werewolf in London.

Creatures straight from the cover of AtomiComics’ “Strange Tales” burst forth to rampage and massacre the backwoods locals. Join Johnny, Cleet, Jim Deedle and the rest of the gang at the Butchered Buck as they fight off this terrifying invasion of creatures from who knows where!

This house ties into Jim Deedle, the son of John Deedle. John Deedle was one of Mary Worthington's students and one of the students involved with the prank resulting in her disappearance. Jim Deedle was adopted by his uncle after his father disappeared. One day, Jim read a comic about a man named John Deedle fighting off octopus-like aliens, resulting in the boy being afraid of anything resembling an octopus and also resulting in him developing a fear of the monsters in the comic hiding under his bed.

He was sent to Dr. Mary Agana to cure this fear. Dr. Agana placed him under hypnosis, put a sack over his head and tied ropes around his body in order to make him believe he was caught by the tentacles of the alien octopi he feared. He was told all he had to do was to step off the table he was standing on, ending the nightmare. Unfortunately, what she didn't tell him was that she also tied a noose around his neck, so when he stepped off the table, he was strangled to death.

Guests would enter the queue to the left of the Twister building. The queue would make it's way forward to Soundstage 22, where guests would enter the house. Once they entered they would be greeted with the facade, which was The Butchered Buck roadhouse. Outside the roadhouse, the source of the problem was immediately apparent: a small meteorite has smashed into the well outside, glowing and smoking. A mutilated dog lies nearby.

Passing around the side of the building and through a side door, guests found the bloodied rednecks still partying and drinking at the bar. Making their way past the violent drunks, they found that part of a hallway had collapsed and an elderly man was asleep in a rocking chair in front of the ruins. Every so often, his gun would suddenly go off.

In the long hallway around the corner, doors slammed open with victims running out, screaming for help before tentacles pulled them back in. Suddenly, a shotgun could be heard firing and air would shoot from one of the doors as pellets flew by. A large pit in the next room was filled with gore and blood and a redneck driven mad by the chaos.

Entering the kitchen, a man suddenly ran out of a back room, firing his AR-15 at an unseen creature as another one leapt from behind the shelves. In the strobe-filled freezer, several more rednecks were hidden among the shelves and refrigerators.

The next section of the building suffered severe structural damage, and movement could be seen through the broken boards and fallen rubble. A light blazed to life, and a massive creature with one huge eye lumbered toward the line.

Entering a small bedroom, the body on the bed has been torn to shreds and tentacles of strange, alien flesh wrapped around the room like a demented spider's web as cackling mad survivors lunged from hidden alcoves. In the yard outside, a survivor pops through holes in the fence to shout at guests.

The house ended with a garage, where a jeep shook and the sounds of a struggle could be heard from inside. A towering humanoid alien watched the scene from the rafters as another hunter hid among the cylinders of torn flesh that had been hung in front of the exit. 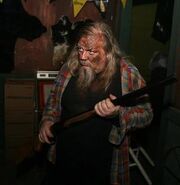 Retrieved from "https://halloweenhorrornights.fandom.com/wiki/Creatures!?oldid=120253"
Community content is available under CC-BY-SA unless otherwise noted.