A vampire who stands out as one of the most powerful and ancient. His origins are a mystery, he might have been a young warrior who impaled his enemies on stakes. He resides on a luxurious Castle In Transylvania where he terrorizes the countryside.

Once murdered by Van Helsing when the latter was the right hand of God, he made a pact with the Devil so he could not really “die”. The Devil revived him as vampire and gave him wings to come and go from his icy fortress. There was a catch however, he could not feel love. He was made a part of Pavel Pranevsky’s film, his fortress was used to house a cavalcade of villains from various horror movies.

He is a very powerful Vampire. He once was brought back along his fellow monsters for Jack's Carnival and Freddy’s Nightmare version of the theme park and was subsequently brought back by the forces Darkness in later years.

Throughout the Events[edit | edit source]

Almost every Dracula that appeared during Halloween Horror Nights was based on the likeness of Bela Lugosi's performance from Dracula (1931).

He was the very first icon at Halloween Horror Nights alongside his fellow Monsters. He appeared at the Dungeon of Terror.

Technically, the Richard Roxburgh Dracula appeared in Universal's House of Horrors (Hollywood) in 2006, and the whole setting was that of his icy fortress that year.

Count Dracula as he appeared in the 1995 Universal House of Horror haunted house. Image from this video. 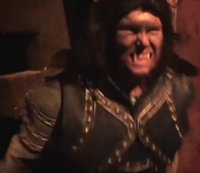 Count Dracula as he appeared in Dracula Untold: Reign of Blood (Orlando). 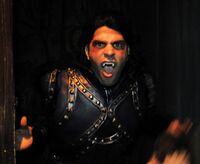 Count Dracula as he appeared in All Nite Die-In: Double Feature. 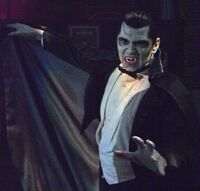 Count Dracula as seen in the HHN 2019 commercial

Count Dracula as seen in the HHN 2019 commercial 2 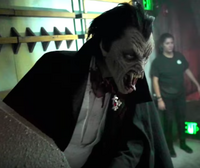 Count Dracula as he appeared in the Universal Monsters (Orlando) house.

Retrieved from "https://halloweenhorrornights.fandom.com/wiki/Count_Dracula?oldid=115993"
Community content is available under CC-BY-SA unless otherwise noted.