Cold Blind Terror was one of the seven haunted houses that were featured during Halloween Horror Nights: Tales of Terror. It was located in Soundstage 20.

For their 2005 event, Universal created their own demented country that runs on blood and sacrifice. Two of the soundstage haunted houses Universal chose to have at the event were based on the primal fears of humans. Cold Blind Terror was one of these houses which chose to prey on guests fears of the dark and cold.

The house would be modeled after the Disorientorium from the year before, and brought you through a total onslaught to your senses. The house was very disorienting and was one of the only houses to have foam inside of it. It was also one of the first to crank up the air conditioning.

The house would be located in Soundstage 20, the closest soundstage to Islands of Adventure. Soundstage 20 is one of the larger soundstage facilities designed to be used as filming locations for movies and television shows.

Where can you turn when you find yourself in utter darkness? Who can you trust when you can't trust your own eyes?

A research team (probably the catalyst for Legendary Truth) was investigating the other side of a pathway known as Maldaken Pass. According to a notebook written by one of the researchers, it was theorized that the "other side" was the epicenter of terror, where the most basic and primeval elements of human fears coincided.

The research team grabbed the necessary tools and headed off to a mountain in the North Hollow which they dubbed "C.B.T." All that was left was audio messages- whether they mar their fates by the monsters or the Queen is anyone’s guess

On the map of Terra Cruentus found on the Halloween Horror Nights: Tales of Terror website, visitors could click on and view the The Hollows region of the map. In the North Hollow, they could access the website page for Cold Blind Terror by clicking on an cave with a person inside. On the page, guests could see a tent with a typewriter, various climbing gear, a notebook, and some tapes. Clicking on the typewrited shows a strange clue for the Terra Clue Game. Visitors could also click on a map to see the map of the area. Additionally, guests could click on and read the notebook to read the journal left by the explorers. Clicking on the lamp on the table made the lights go out and a woman could be heard screaming. Finally, guests could click on three audio tapes to hear the fates of the explorers. 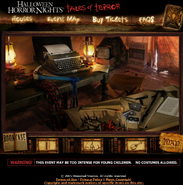 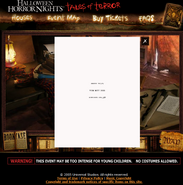 A map that appeared on the website page for Cold Blind Terror. Photo from HHNYearbook.com.
Add a photo to this gallery

Audio that played on the Backstory Page: Fens of Sargath by Midnight Syndicate

Audio that played when the first tape from the top was clicked on in the Backstory Page:

Audio that played when the second tape from the top was clicked on in the Backstory Page:

Audio that played when the third tape from the top was clicked on in the Backstory Page:

There were a few scenes that impressed people. One was a black and white patterned room with strobes and people dressed just like the walls. Another room was where you walked into a solid white room with two statues in the middle. On the wall there was a cluster of those really bright three million watt flood lights. When those went off, you couldn't see because of your eyes being so used to the light. When they come back on the statues were gone and two men dressed like the statues were in the room. There was also a room filled with foam.

The facade for Cold Blind Terror. Image from alwayshalloween.com.

Image from the now defunct nogodforme.com.
Add a photo to this gallery

HHN 15- "Cold Blind Terror" Queue Video -From The HHNYearbook-
Add a photo to this gallery
Retrieved from "https://halloweenhorrornights.fandom.com/wiki/Cold_Blind_Terror?oldid=110364"
Community content is available under CC-BY-SA unless otherwise noted.