Clown Attack was one of the four scarezones that were featured during Halloween Horror Nights X. It was located in Hollywood.

Hollywood is an area of Universal Studios Florida located to the right of the park entrance. It is a recreation of the city of Hollywood. In 1994 and 1995, Universal decided to use this area as the location of a couple of scarezones. Due to the introduction of The Festival of the Dead Parade, Universal stopped putting scarezones in this area. However, in 2000 they decided to put one here (though, due to the parade it was not as elaborate as the two previous Hollywood scarezones). The scarezone would feature many different clowns.

Not much is known about this scarezone other than that it was populated by evil clowns, much like Jack himself. 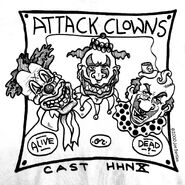 Retrieved from "https://halloweenhorrornights.fandom.com/wiki/Clown_Attack?oldid=101809"
Community content is available under CC-BY-SA unless otherwise noted.