Start a Wiki
Cindy Caine, otherwise known as Sindy, was the daughter of Albert Caine and the unused icon for Halloween Horror Nights: Islands of Fear.

Originally, each island at Universal's Islands of Adventure was meant to convey that everything was part of Cindy's disturbed mind, with every scareactor and creature part of her "playthings". The story of Cindy was changed due to the fact that there was a string of child abductions at the time and was replaced with The Caretaker. Later, she became to be known as his daughter in later works starting with Screamhouse: The Resurrection. She was also meant to be the icon for Halloween Horror Nights: Twenty Years of Fear, but the idea was scrapped.

Contrary to popular belief, Cindy actually first appeared in Halloween Horror Nights 13’s haunted house, Screamhouse: Revisited. In the kitchen scene, a young girl who resembles Cindy is caged under the kitchen counters… with her brother. 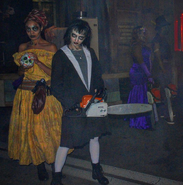 Retrieved from "https://halloweenhorrornights.fandom.com/wiki/Cindy_Caine?oldid=59256"
Community content is available under CC-BY-SA unless otherwise noted.