"Every soul and then someone always leaves something behind, a trinket or toy or even a forgotten soul. This is no child's play. - The Usher

Chucky: Friends til the End was one of the eight haunted houses that were featured during Halloween Horror Nights: Ripped from the Silver Screen. It was located in Sprung Tent 1 and was based off of the first five Child's Play movies.

In 2009, Universal decided to feature a haunted house at their Halloween Horror Nights event dedicated to the Child's Play franchise. The house would be the comedy house that year and would have an original story made by Universal. The story goes that Chucky brought many toys to life in order to wreck havoc on the world.

2009 was the first year Universal decided to give codenames to all of their haunted houses. Some people say the codename was "Doll", while others say it was "Geppetto", the man who created Pinocchio.

The house tied in to a story on the Halloween Horror Nights website, Insane. In it, weird disfigured dolls were found scattered throughout the theater, causing those who found them to go insane. In 2006, Universal built two hurricane-proof tents behind the World Expo area of the park specifically for holding Halloween Horror Nights haunted houses. This house would be located in the southernmost one (called Sprung Tent 1).

In 2018, the house received a sequel scarezone in the form of Revenge of Chucky.

Ever wonder what happens when good toys go bad? Chucky has been hard at work, tinkering with your favorite childhood playthings. Nothing is what it seems as you step inside and experience what its like to live in Chucky’s world. This is no Child’s Play.

Ever wonder what happens when good toys go bad? Nothing is what it seems as you step inside and experience what its like to live in Chucky’s world.

Following the premiere of a certain film, dolls and toys left in the most horrifying conditions were found in the Universal Palace Theater. Because of their condition, there was no way they were the result of a child. Nevertheless, they were placed in the theater's Lost-and-Found bin, but nobody would come to claim them.

People who found the mutilated toys were so frightened, they began to suffer nightmares about them. One theater patron was unnerved, he had to be checked in to a mental hospital, claiming he was seeing the toys coming alive and attacking him.

After the theater was shut down, the toys in the Lost-and-Found bin all but vanished. The whereabouts of the toys as well as whoever lost them in the first place remains a mystery.

Going through a backdoor, guests would head towards Sprung Tent 1. Guests would enter the tent through the facade for the house, which was a "Good Guys Doll" box that showed Chucky ripping out with a knife while 80's punk rock music played.

The house was a funhouse created by Chucky. The scareactors were twisted toys, like evil Monkeys in a Barrel, among others. In the house, rock music similar to the toy in the scene, played. i.e: Welcome to the Jungle by Guns N' Roses in the "monkeys in a barrel" scene.

One scene involves guests walking through the Good Guy dolls factory from Child's Play 2, and Chucky would burst through walls of doll boxes as well as have boxes "fall" on guests.

There is also a shrine dedicated to Chucky's bride, Tiffany Valentine (played by Jennifer Tilly in the movies). This serves as a distraction for burnt dolls with melted faces to attack from the walls.

A room filled with Teddy Bear scareactors also appeared, along with one featuring a pile of toys that would jump out at guests.

There was also a room filled with Green Army Men toys shooting guests with toy pop guns. Chucky will pop up wearing a green helmet and shoot with a real gun (it's really a disguised tap gun).

In the final scene, guests walk through the factory scene once more only to have multiple Chuckies attack from all sides.

A picture of the facade for the haunted house. Image from Halloween Horror Night fans Myspace. 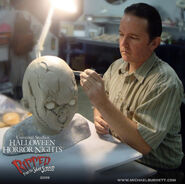 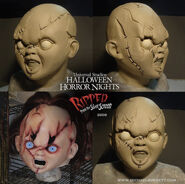 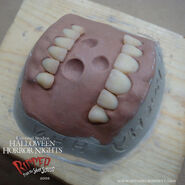 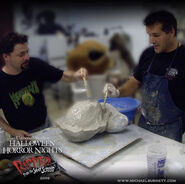 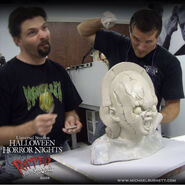 Retrieved from "https://halloweenhorrornights.fandom.com/wiki/Chucky:_Friends_til_the_End?oldid=112091"
Community content is available under CC-BY-SA unless otherwise noted.