Chucky's Funhouse was one of the four haunted mazes that were featured during Halloween Horror Nights 2009 (Hollywood). It was located in the Year-Round Haunt Venue.

America's favorite serial killer doll is taking matters into his own, little hands. Chucky has taken over an old, carnival funhouse and is raising an army of KIller Dolls to take his ultimate revenge on humanity! 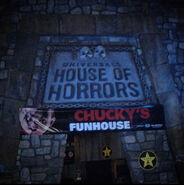 Credit to: adventures_in_the_everyday on Instagram
Add a photo to this gallery
Retrieved from "https://halloweenhorrornights.fandom.com/wiki/Chucky%27s_Funhouse?oldid=116018"
Community content is available under CC-BY-SA unless otherwise noted.