Castle Vampyr was one of the seven haunted houses that were featured during Halloween Horror Nights XIV. It was located in Soundstage 23.

This house was located in Soundstage 23, after it was not used for eight years. Soundstage 23 is one of the larger soundstage facilities built in Universal Orlando. These were built for the purposes of filming movies and T.V. shows. The house took up the entire soundstage, making it a very long house.

Castle Vampyr was awarded the House of the Year award in 2004. The house would get a sequel scarezone in the 2006 event titled Blood Masquerade. It would also receive a tribute scene in the 2015 haunted house, Jack Presents: 25 Years of Monsters & Mayhem.

The castle itself is rumored to be the Blood Shrine of an ancient race that is long feared... but of which little is known. With ornamentation's gathered from all over the world, CASTLE VAMPYR is said to contain a talisman from each "house" of the breed. And this evil congregation beckons the faithful to gather every thirteen years to renew vows to a dark power that drives their insatiable thirst for immortality.

Enter a gothic castle where you're surrounded by bloodthirsty creatures of the night.

In 2002, a girl was invited to pledge for the sorority Tau Nu Alpha on October 13th, at exactly midnight. The location the pledge was to occur was kept secret until the ceremony began. The invitation also said that they had to wait for a driver on the front steps of their sorority at exactly 8:30 PM. Finally, the invitation asked her to bring a long stem rose, a black candle, casual clothes, and a small bottle of Virgin Root wine.

The girl was driven to the site of the pledge, an old gothic castle with a creepy history. It is rumored that the castle was the blood shrine of a mysterious ancient race of vampires that is feared by many. The castle is believed to hold a talisman from each house of the race. Every thirteen years they congregate and renew vows to a dark power that drives their insatiable thirst for immortality. They would lure unsuspecting victims into the castle in order to retain their immortality, most likely by feeding on them.

When she arrived at the castle, she left one of her friends a message, telling her about how eerie the castle looked and how a creepy cab driver dropped her off all alone there. She goes on to say that she expects the Tau sisters to welcome her for the night.

A couple of hours later she called again. In the message she goes on to say that the no one showed up, and that she is starting to get angry. She starts to wander around the outside of the castle, and she complains of it being cold, foggy, and very unpleasant. She ends the message by saying that one of the back doors in the garden was open, and that she was going to enter the castle if no one showed up.

In her final message, she pleads for her friend to pick up the phone because she feels something following her within the castle. She starts panicking because she cannot find her way out of the castle. A loud screech can then be heard in the distance, and the girl freaks out, mentioning that something just flew over her head. The final message ends with the girl being attacked by a vampire. It is unknown whether the girl made it out alive, though it is highly unlikely. Her friend (the one she sent the messages to) most likely went insane after the experience of hearing her friend die at the hands of vampires. Another possibility is that the girl actually did escape, and went insane after her experience. Either way, one of the girls was sent to Shadybrook Rest Home and Sanitarium after their traumatic experience. The records of this experience were kept in a box in one of the rooms of the asylum.

In the Patient Records on the Halloween Horror Nights XIV website, visitors could see the contents of the box detailing the story of the Castle Vampyr patient. They could click on and read the invitation sent to the girl by the sorority, and could also listen to all three phone messages by clicking on a cell phone. There was also a clickable paper that said "Research Vampyre Estate Online", though the contents of the paper are currently unknown. Also on the page was a long stemmed rose, a candle, a small picture of one of Castle Vampyr's windows, and a larger picture of a different window. Finally, the Point of Evil symbol was on the top of the invitation, and would take visitors back to the main Patient Records page when clicked on.

In the house, guests would assume the role of the girl from the backstory, exploring Castle Vampyr and trying to find their way out while being attacked by vicious bloodthirsty vampires. 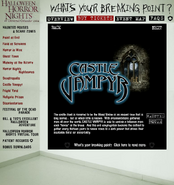 The first three images are from the Halloween Horror Nights XIV Website.

The invitation that appeared on the Castle Vampyr website page.

The rest of the images are from the Halloween Horror Nights: Sweet 16 website until otherwise noted.

Layout of Castle Vampyr with notes from The Caretaker.

Audio that played when the phone was clicked on in the Patient Records:

CASTLE VAMPYR- Guests would enter the queue in between the Fright Yard scarezone and the New York Public Library. The queue would lead guests to Soundstage 23. Outside, there was a screen on which a man is talking about this history of vampires, as well as protective measures to take if you meet a vampire. He talks about having garlic and holy water handy, and about not responding if you hear your name being called.

After entering the soundstage, you then enter the courtyard of Castle Vampyr. There are neat gargoyle stone statues there, as well as a carriage. A vampire bride, dressed in white, stands there silently, and occasionally moves at someone.

You then enter the dining room. A vampire stands in front of a long dining room table, talking about the disgusting foods that are laid out on the table. His talking serves as a distraction, and a couple vampires that are hidden in this room jump out at you.

You then enter a hallway in which there are statues on both sides. Some are real, and some are fake. At one point, there's a face in a portrait on your left, and a statue on your right. Both of them are live, and they attack you.

Next you, enter a bedroom, where a female vampire is laying on a bed and moaning. She serves as a distraction, and a vampire pops out from a good hiding spot and reaches for you.

You then enter the castle's library. There is a vampire on a bungee cord way above you, on top of the wall. He jumps around, joking with guests. A vampire is hidden behind one of the bookcases, and will get you if you're not careful.

You then enter a long hallway with billowing red curtains on both sides. Vampires jump out at you from several of these curtains.

You then enter the disco room. Lights are blinking, and bodies are hanging in body bags. The entire room is splattered with blood, and dancing vampires here will make sure that you do not escape.

You then enter a room where a couple of vampires who look like Nosferatu try to get you. You then go up a staircase to the attic. Vampires on bungee cords attack you from both sides. There are especially ruthless if you are really scared, as were the girls in front of me.

Then, you go down a staircase. One last vampire is hiding at the bottom of the staircase to scare anyone who thinks the haunted house is over. You then escape into the night air.

Photo from the now defunct ioacentral.com. 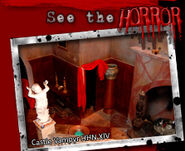 Image from the now defunct, hauntzone.net. 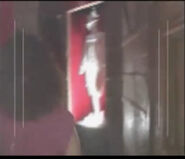 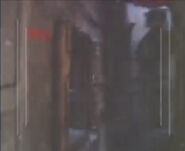 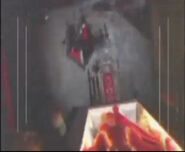 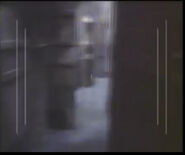 Retrieved from "https://halloweenhorrornights.fandom.com/wiki/Castle_Vampyr?oldid=116168"
Community content is available under CC-BY-SA unless otherwise noted.