Case Files Unearthed: Legendary Truth was one of ten haunted houses that were featured during Halloween Horror Nights 30. It was located in the Shrek Theater. The house revolved around Boris Shuster (a private investigator from New York and core founder of Legendary Truth: The Collective) and his many investigations revolving around paranormal occurrences.

For their 2020 Halloween Horror Nights event, Universal was planning to hold a haunted house centered around the popular music artist Billie Eilish. After Halloween Horror Nights was cancelled that year due to the COVID-19 pandemic, this haunted house never saw the light of day. Afterwards, speculation began for a maze based on the Creepshow series on Shudder. It was finally announced the maze would center around Legendary Truth and its founder, Boris Shuster.

On August 12th, 2021, Universal announced that Case Files Unearthed: Legendary Truth would be coming to Halloween Horror Nights that year. The Codename for this House was "Boil".

The house would be the fifth (and possibly final) house located in the Shrek Theater. The houses put in this location would be built within the second, less-used theater for the Shrek 4D attraction.

Follow the trail of a private eye as an investigation into the supernatural leads you into a dark world of ghouls and terrifying creatures.

Step into the shoes of Boris Shuster, a hard-boiled private eye investigating the supernatural. Follow his search for clues into the darkness of a shadowy "film noir" world populated by ghouls, poltergeists and all manner of monstrous terrors.

The Fear Behind the Facades[]

What evil lurks in the heart of men...? More appropriately, what evil lurks behind these walls? The stories have become legendary because a retired gumshoe decided to his department-issued "heater," his nickel-plated "bracelets" and his badge. Although retired, Boris Shuster was as hard boiled as a cop can be... and restless. So he opened up a business as a private detective who specialized in the unexplained, the "beyond weird" and the stranger than fiction cases no one else would touch.

And now you're about to step into his world, re-open his cold case files and come face to face with the criminals, characters and creatures that led to the founding of Legendary Truth and its COLLECTIVE of conspiracy believers.

The queue entrance was in Hollywood to the right of the Hello Kitty Shop. The queue would go through the queue line for Shrek 4D. The extended queue would go down Shrek Alley in a series of switchbacks. You would enter the house through a backstage door, into the second theater.

Entering the House there was a wall that introduced Guests to "New Jersey October 25th, 1991 6:00 p.m." and then entered the attic of Boris Shuster. Inside was sticky notes and news articles pinned to the walls, along with boxes and junk. Tim Foyle is seen reading Boris's novels. You then enter the novels.

Terrors of the Tenement[]

Guests enter and see the book cover of "Terrors of the Tenement". Above the hallway is "New York October 25th, 1948 6:00 p.m." where behind door 201, window labelled 201 Empire Modeling Agency, a projection shows a Woman walking by and then a Ghoul sneaking up behind her and killing her. A sliding piece opens while a Ghoul pops out and scares guests.

Guests then enter door 202, Boris Shuster Private Investigations, and see Boris's Office where Boris Shuster shooting a Ghoul. Inside the office, you can see the interior of his window showing Delancey Street in the rain. On his desk is the Baccanoid Vase Totem. The Ghoul then attacks guests as they exit the section.

Guests enter the attic with the book cover of "Murder By Mannequins" with sticky notes pertaining to information inside the novel. Then guests enter an old warehouse.

Inside the warehouse was a bunch of mannequins along with the Maschorian's Egg and Bear Trap Totem on a sewing table. Then behind a windowed door was a projection of Boris Shuster trying to enter the warehouse as the door handle moves but he is unsuccessful.

Guests continue along as a clothing line moves and then 2 Murder Mannequins attack guests. Guests then enter a room with more mannequins and a drop down panel that revealed a woman's head cut up by scissors.

Massacre At The Museum[]

Guests enter the attic with the book cover of "Massacre At The Museum," photos, and more sticky notes and then enter the NYC Natural History Museum.

Inside was the B-30 Archives doors and a shelf with historical items and a Glowing Cerebin Summoning Cube. Throughout the room was flashes of light from Boris's camera taking photos of the crime scene, some of which appeared in the previous attic transition.

On the stairs were two mangled and bloody corpses and on the right was a Matater clawing a corpse before running towards guests under a flashing light. Then a Matater would pop out at guests from under the stairs and another to the right before guests exited the section.

Guests enter the attic to the book cover of "Murder by Moss Man". There is a photo of the NYC Manhole Cover for the Sewers beneath Delancey & 7th Avenue accompying the sticky notes in this scene. Guests then enter the NYC Delancey Sewers.

Throughtout the section, there are skeletons of those killed and dumped by the Mafia. On the right of the hallway r ead "NYC Public Works Delancey ST & 7th Ave." Guests walk down the hallway to feel string hanging down and see a Skeleton at the end with the Glowing Kerezan Summoning Cube, like the one from the Museum. On either side of guests would be 2 Moss Men (Re-animated corpses) that would pop out as they passed by. Before exiting, guests would pass by a drop down panel with a skeleton behind it as well as more hanging string.

Guests enter the attic with the book cover of "The Lustful Alibi" and sticky notes, before they enter Delancey Street.

Guests approach the facade of the Kitty Kat Club and its lit up sign. At the end of the facade was a static figure of Boris smoking a cigarette.

Guests enter the Club and are immediately attacked by a She-Devil. Behind her is shelves of glasses and alcohol, along with the Strengoit Vase Totem. Guests would pass along tables of dead patrons and see Madame Murie on stage welcoming guests and singing. Guests would then be attacked by a She-Devil from behind a curtain and again by one last She-Devil before exiting the section.

Guests enter the attic with

the book cover of "The Beast Unleashed" and sticky notes, and would then enter Sly Tony's Basement.

Inside the basement was a sesk with jars, junk, and the Cerebin Cage Totem. Guests could see a door up the stairs with a shadow behind it, as well as hear Boris trying to enter. Guests would pass a huge cage with Sly Tony's head inside of it and then be attacked by a Wendigo. Guests would then exit the basement into an alley, and be attacked by the Wendigo again before exiting the section.

Guests enter the attic with the book cover of "Death by Dolly" and sticky notes, then enter Rosie's Bedroom.

In the bedroom was a bed with Rosie's dead parents and Rosie standing on the other side of it. "Rosie" was written in blood above the bed and next to her was a window projection of New York City. Guests would then be attacked by New Dolly with a machete. There was a shelf with a bunch of dolls and the Morphan Doll Totem in the middle of it.

Guests would enter a short hallway with a bunch of disassembled and improperly reassembled dolls and small effects blowing air guests before they exited the section.

Evidence To The Contrary[]

Guests enter the attic with the book cover of "Evidence To The Contrary" as well as sticky notes, and then enter the Police Station.

Inside the station was a Precinct No.5 Door with a projection of a tentacle monster inside and Boris popping out while shooting at them. Guests continue on to see a corpse at a desk with a box whose contents are glowing and the Kerezan Jar Totem on the desk.

Guests would then be attacked by an Undead Prisoner Zombie popping out of a cell. Guests would continue on and be attacked by a Switchboard Operator Zombie from behind a boxes. Guests then see "New Jersey October 31st 1991 11:59 p.m." on the wall before exiting the Section.

Case Of The Terrible Totems[]

Guests enter the attic one final time with the book cover of "Case Of The Terrible Totems" and the last few sticky notes.

Guests would first be attacked by Matater and then by a Wendigo. They would see Tim Foyle on the Arcane Circle surrounded by the Baccanoid, Kerezan, Strengoit, and Cerebin Totems and bricks, with his eyes and mouth glowing while behind him was a portal, projecting the Legion symbols flashing by. Guests would then be attacked by a Ghoul before finally a She-Devil Appears one last time.

Image from Inside Universal

Image from Inside Universal 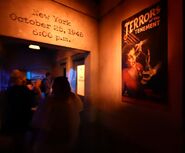 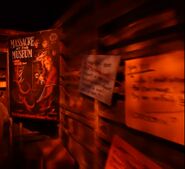 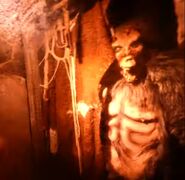 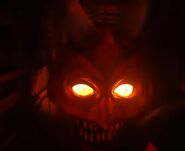