Carnage is a Marvel Comics super-villain that appeared during Halloween Horror Nights: Islands of Fear as a sub-icon and one of the Caretaker's minions.

Serial killer Cletus Kasady becomes a super-villain after a piece of the symbiote Venom bonds with him, turning him into the psychotic symbiote monster and enemy of Spider-Man called Carnage..

Kasady is a deranged sadist and chaos-worshiper, responsible for countless murders even before he gains superpowers. The symbiote amplified his psychotic nature making him even less mentally stable than he had been previously, and therefore even more dangerous and erratic. He believes in a philosophy that if people just give up law and order and give into their base, violent urges, then the world will truly be free, or at least that's the excuse he uses to justify his bloody rampages.

During Halloween Horror Nights: Islands of Fear, he served as a disciple of Albert Caine who gave him the power to destroy the Marvel Superheroes.

None of this showed up at the event itself, but in the comics Carnage is capable of copying Spider-Man's powers such as superhuman abilities (strength, speed, and agility) and climbing on walls. He can morph sections of his body such as his hands and feet into bladed weaponry and tentacles. He can lift at least 70 tons and never seems to tire. The symbiote can shape-shift, allowing him to disguise himself as anyone, and copy any clothing. His symbiote is permanently fused with his blood and cannot be separated from him without killing him or severely harming him. Sonic wave sounds are one of Carnage's weaknesses, although to a lesser degree than Venom. Intense heat, such as fire, is an even greater weakness, more so than Venom.

A picture of Carnage in the Island Under Siege scarezone.

Carnage as he appeared on the Halloween Horror Nights website. 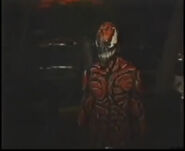 Retrieved from "https://halloweenhorrornights.fandom.com/wiki/Carnage?oldid=111854"
Community content is available under CC-BY-SA unless otherwise noted.