Body Collectors was one of the seven haunted houses that were featured during Halloween Horror Nights: Tales of Terror. It was located in the Jurassic Park Discovery Center.

For their 2005 event, Universal created their own demented country that runs on blood and sacrifice. One of the houses they chose to have at the event was a house based on an industrial factory called Body Collectors. Here, The Gentlemen take random parts and organs from victims, turning them into tools and artwork. The Black Guard trades coins for some of the parts in order to create a new Terra Throne Blade for the Terra Throne sacrificial rituals. The Gentleman were based on creatures from a Buffy the Vampire Slayer episode title Hush.

The house would be located in the Jurassic Park Discovery Center, a building located in the Jurassic Park area of Islands of Adventure that features a restaurant on the top floor and an interactive "play" area on the bottom floor. In 2005, Universal decided to build another haunted house on this bottom floor after the success of the previous house in this location called Psycho Scareapy. Universal would again place a tarp in between the floors (so guests couldn't see the house from above) and they would build temporary walls for the haunted house.

This would be the final year the building was used to hold a house, as the Halloween Horror Nights event moved from Islands of Adventure to Universal Studios Orlando. The house would prove to be very popular and would win the House of the Year award in 2005. The house would also receive a sequel haunted house in 2008 titled Body Collectors: Collections of the Past.

Its blood and gore galore in this industrial factory where processing human body parts is the business... and business appears to be good.

Deep in the recesses of a blood soaked Gorewood forest, a storage facility has been built to warehouse, store and process what remains of the unfortunate victims of the Terra Throne rituals. Drained of blood, withered and pale, the corpses are piled, prepared and rendered by the Collectors.

Deep in the Gorewood Forest is the facility of the Body Collectors, where corpses are turned into art, tools, weapons, and decorations. The Collectors would also store various body parts in a warehouse. They would process the remains of any corpse they could get their hands on, and drain out all of their blood. The Body Collectors are responsible for the creation of the handle of the Terra Throne Blade, made from the bones of humans.

On the map of Terra Cruentus found on the Halloween Horror Nights: Tales of Terror website, visitors could click on and view the Gorewood Forest region of the map. There, they could access the page for the Body Collectors by clicking on a wheelbarrow full of skulls. The page showed a small desk next to a window with a medical bag and various medical tools. Visitors could click on a journal to read the rendering procedures of the Collectors, and a piece of paper to read their schedule. They could also click on a drill to hear the noise of a drill piercing flesh. 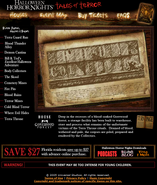 Images are from the Halloween Horror Nights: Tales of Terror website until otherwise noted. 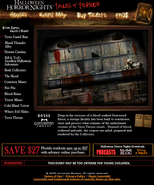 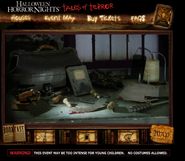 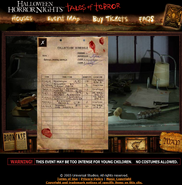 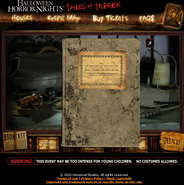 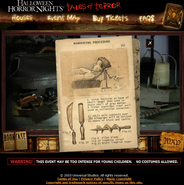 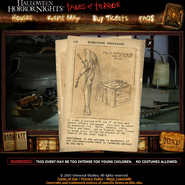 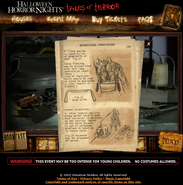 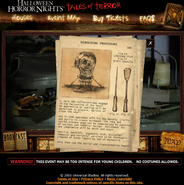 The rest of the images are from the Halloween Horror Nights: Sweet 16 website until otherwise noted. 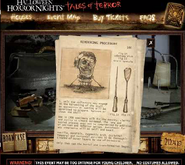 Song that played on the Website Page: Secret Chamber by Midnight Syndicate

Audio that played when the drill was clicked on in the Backstory Page:

According to some accounts, the first room was a representation of the logo for the house, with broken windows and barrels. The rooms in this house featured The Gentlemen mutilating different corpses on tables. One notable scene featured a woman lying down on a table with a Gentlemen ripping out her spine.

The facade for Body Collectors. Image from chainsawwolf's Photobucket.

From Screamscape
Add a photo to this gallery

Retrieved from "https://halloweenhorrornights.fandom.com/wiki/Body_Collectors?oldid=107831"
Community content is available under CC-BY-SA unless otherwise noted.