Bill and Ted's Excellent Halloween Adventure IV was one of the four shows that were featured during Halloween Horror Nights V. It was located in The Wild West Stage.

Check it out...The boys are back with a host of infamous characters. The action is bigger and better than ever!

According to this, the show featured interactions between Kevin Costner and Dennis Hopper from Waterworld, John Travolta and Samuel L. Jackson from Pulp Fiction. The show also featured Arnold Schwarzenegger, Sylvester Stallone, The Riddler, Batman, and Bruce Willis. 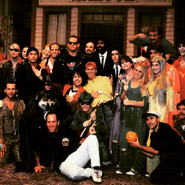 Image from James Keatons' Instagram
Add a photo to this gallery
Retrieved from "https://halloweenhorrornights.fandom.com/wiki/Bill_and_Ted%27s_Excellent_Halloween_Adventure_IV?oldid=100119"
Community content is available under CC-BY-SA unless otherwise noted.