Bill & Ted's Excellent Halloween Adventure was one of the two shows that were featured during Halloween Horror Nights: Ripped from the Silver Screen at Universal Studios Florida. It took place on the Fear Factor Stage.

The duo return for an all new excellent adventure featuring the famous and infamous in pop culture.

Bill S. Preston, Esquire and Ted Theodore Logan return with an all new, especially excellent Halloween adventure featuring a who's who of notorious celebrity guest stars.

The pre-show video is hosted by a talking Computer robot, who tells you the performances safety rules. He starts by saying "If you're looking for crap like John and Kate +8, then you are going to be disappointed, because we are going to make fun of crap with a little more BALLS!" He continues to remind guests that there is no photography or videotaping of the show and that if they are caught doing it, they are subject to "ejection from the theater, as well as a serious beat down from Chris Brown" who is caged backstage, looking for Rihanna's face in the camera's lenses. The computer further continues that the show contains loud effects, as well as offensive language, but continues that guests can replace the offensive words with "other stuff that sucks", such as replacing ASS with Shia LaBeouf, BITCH with Tyra Banks and SHIT with The Economy. The computer starts off the show with one last line "Oh, The Economy, I almost forgot! Get ready you Tyra Banks-es, because we will rock your Shia LaBeouf's!!!".

The show begins with a BREAKING NEWS report with news anchor Dick Johnson (played by Halloween Horror Nights Orlando's creative directer, J. Michael Roddy) who transfers the report to Rob Cocks, who is on site at a movie theater. The two explain that the current movies suck because all the characters have been "Ripped from the Silver Screen" and are now running amuck in the real world, leaving their movies with terrible character development, with Dick saying the character development is "worse then X-Men Origins: Wolverine". The two conclude the report by stating that there will be a "six-minute sexy dance number" followed by the actual show. 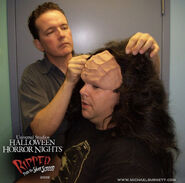 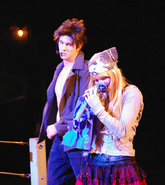 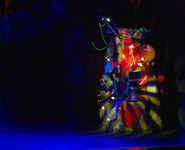 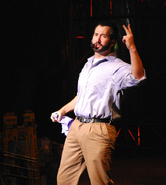 From HHNYearbook.com
Add a photo to this gallery

Retrieved from "https://halloweenhorrornights.fandom.com/wiki/Bill_%26_Ted%27s_Excellent_Halloween_Adventure_(Orlando_2009)?oldid=116260"
Community content is available under CC-BY-SA unless otherwise noted.