Bill & Ted's Excellent Halloween Adventure (2004) was one of the two shows that were featured during Halloween Horror Nights XIV. It was located in the Toon Lagoon Amphitheater.

Those two time traveling dudes are back to party on with some of the biggest names in the show biz.

Bill S. Preston, Esquire and Ted "Theodore" Logan are two teenagers living in an apartment at 69 Moonya Road in Orlando Florida. They owe $3,300 to the landlord and received an eviction notice saying that they received complaints of loud parties, have a high phone bill, and are six months late for rent. This violates the contract Bill and Ted signed on June 10th, 2003. The eviction notice was signed on August 11th, 2004, and ended by saying that they had to vacate the premises by October 1st, 2004.

As stated earlier, Bill and Ted had a very high phone bill, due to making extended calls to places that would be involved in their Excellent Halloween Adventure that year, such as Washington D.C. and Springfield. Their phone bill cost $1,140 and was long past due.

While recording one of their albums, the landlord came in to kick them out. They tried to escape in the phone booth in order to go back in time and pay the rent, but their phone was cut off due to their overdue phone bill. Presumably, they were taken to a mental asylum, most likely Shadybrook. The records of their experience were kept in a box in one of the rooms of the asylum.

In the Patient Records on the Halloween Horror Nights XIV website, visitors could see the contents of the box detailing the story of the Bill and Ted show that year. They could click on and read the phone bill and the eviction notice. Visitors could also listen to the moment when the landlord came to Bill and Ted's apartment by clicking on a CD. Also on the website were multiple guitar picks, a half eaten snowball, a few wristbands, a bag, a couple of soda cans, and two unidentifiable wrappers. The Point of Evil symbol appeared on the page as a wristband surrounded by three guitar picks, and when clicked on would take visitors back to the main page of the Patient Records. 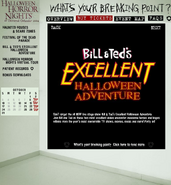 Audio that played on the Show Page:

Audio that played when the CD was clicked on:

The show starts with the grown-up Olsen Twins giving a speech about how there are scantily-clad dancers, foul language, and explosions in the show. We Will Rock You plays and the cast from Queer Eye From the Straight Guy comes on stage and start dancing with some women to the song Cherry Pie by Warrant. A Channel 4 news flash appears, saying President Bush and Presidential nominee John Kerry have disappeared and their whereabouts are unknown. The phonebooth appears and out come Bush and Kerry accompanied by Darth Vader and a Stormtrooper. Vader orders the Stormtrooper to give the phonebooth back to Bill and Ted before they discover that it is missing. Bush demands Vader to reveal his access of evil. Dr. Evil comes out of the ceiling and jumps on stage. Dr. Evil explains he wants to become president. Kerry says that you cannot steal an election and Bush begins to laugh uncontrollably. Kerry says he does not have a running mate, who Dr. Evil introduces as Charles Montgomery Burns.

Dr. Evil says he is assembled his evil cabinet. Bad begins to play and Michael Jackson moonwalks on stage. He is appointed Secretary of Child Services. Dr. Evil hosted a convention for pop culture's greatest villains called Shockacon. He hired two evil interns, Nicole Richie and Paris Hilton. He also hired Clark Kent who flies in. Paris and Nicole are ordered to take Bush and Kerry away to a cell and the Wicked Witch of the West comes on stage pedaling her bicycle. She joins Dr. Evil's cabinet. Dr. Evil vetoes the Bill and the Ted. He invited them to his lair under the disguise of a wealthy socialite party and when they arrive, Dr. Evil will execute them by beating the crap out of them. The Queer Eye From the Straight Guy people want to make-up his plan, so they decide to sneak up behind Bill and Ted and strangle them. The phonebooth appears and Bill and Ted jump out. Michael Jackson greets them. The host of the socialite party is introduced to be Donald Trump, who is Dr. Evil in a Donald Trump disguise. They remark his hair and how great it looks and they pull his hair off and they see he is Dr. Evil. Garfield appears to help Bill and Ted and puts Mr. Burns in a headlock. Harry Potter appears on stage and Hellboy goes on stage as well. Bill and Ted start to think about how they do this every Halloween and how they should probably change what they do.

Dr. Evil screams no one survives Shockacon and the villains and heroes start fighting to the song I Feel For You. Paris and Nicole seduce Garfield until his estranged wife comes on stage who is Catwoman. She chases the three of them offstage. Vader gets Bill and Ted in a chokehold and Clark Kent appears and tears away his clothes to reveal his underwear. Hellboy aims his gun at Vader and Vader throws his gun away. Hellboy says we will have to do this the hard way and he uses his hand of doom to lift Vader by the groin and throw him into the phonebooth. Harry Potter and the Wicked Witch battle and Michael Jackson grabs Harry Potter and takes him away offstage. The Witch starts to chase Bill and Ted, but Garfield comes back on stage and the Wicked Witch mistakes him for Puss in Boots. Garfield gets mad and pees on her which makes her melt. Bush and Kerry fight Dr. Evil and Mr. Burns and defeat them. Thriller plays and the song and dance number begins. The show then ends.

A paper that appeared on the Bill & Ted's Excellent Halloween Adventure (2004) website page.

Photo from the now defunct ioacentral.com.

Photo from the now defunct ioacentral.com.
Add a photo to this gallery

Retrieved from "https://halloweenhorrornights.fandom.com/wiki/Bill_%26_Ted%27s_Excellent_Halloween_Adventure_(2004)?oldid=77976"
Community content is available under CC-BY-SA unless otherwise noted.