Bill & Ted's Excellent Halloween Adventure was one of the five shows that were featured during Halloween Horror Nights II. It was located on the Wild West Stage.

The show starts with a gunfight between The Sheriff of an old western town and Black Bart, a bank robber. The phone booth appears and Bill and Ted jump out. Bill and Ted were going back in time to trick 'r treat in their neighborhood over and over again, but somehow they were transported to the wild west. Black Bart jumps in the phonebooth and travels to the future in order to bring back horror movie villains to help him defeat the heroes. Bill brings out the phone Rufus gave to dial if the phone booth gets stolen but instead of the phonebooth coming back the DeLorean appears. Doc Brown comes out and says they need to get the phone booth back. Bill and Ted then call back the phone booth and Bart comes out with a posse of bad guys, including Jason Voorhees, Freddy Krueger and The Terminator.

The villains chase the heroes around and the chase ends when the sheriff shoots Bart. Bill and Ted then bring back musicians to perform an amazing Wyld Stallyns show for the audience. The musicians included Madonna, MC Hammer, The Blues Brothers, and Fat Elvis. The final song is a group rendition of Shout! and the show ends with the house set falling on Doc Brown. 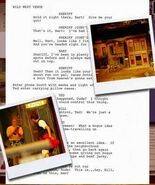 Part of the shows script. 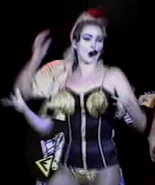 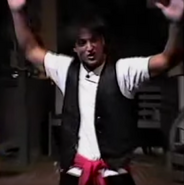 Retrieved from "https://halloweenhorrornights.fandom.com/wiki/Bill_%26_Ted%27s_Excellent_Halloween_Adventure_(1992)?oldid=63046"
Community content is available under CC-BY-SA unless otherwise noted.