WARNING! This page contains information from an event that has yet to conclude. If you wish to remain spoiler free, do not read on.

Beetlejuice was one of the three haunted houses that were featured in the "Halloween Festivities" at Universal in 2020. It was located in the Parade Warehouse.

Enter the world of the original film, more twisted and terrifying than ever. Wander checkered hallways and through the model graveyard as the infamous bio-exorcist haunts you, taunts you and torments you at every turn. It's Showtime!

It's time to turn up the juice and see what shakes loose in this twisted and terrifying haunted house. Experience iconic moments from the original film as you're haunted and taunted by the infamous bioexorcist in his many maniacal forms. He'll do anything to trick you into say his name three times, so he can the enter of the living and wreak havoc.

Beetlejuice will torment you at every turn as you wander checkered hallways to the Netherworld waiting room and abandon you to your fate in the Lost Souls Room. He'll menace you in the model graveyard and join in the fun of Dante's Inferno. You'll succumb to the chaos of the infamous dinner party scene and be a surprise living witness to Beetlejuice's chaotic wedding.

For their 30th Halloween Horror Nights event, Universal wanted to create a haunted house based on the classic Tim Burton film Beetlejuice.

After Halloween Horror Nights 30 was cancelled, Universal announced on September 14th, 2020 that two haunted houses were coming for a Seasonal Experience that year. Beetlejuice was later opened as a third surprise haunted house for the last weekend of the event.

The queue entered from the outside of the entrance for A Day in the Park with Barney. Guests would walk through the pre-show area for Barney and exit out the back. They would then go along a road that goes along the pavilion that contains some parade floats. Going along the side of the Parade Warehouse, guests would round a corner and see a giant picture of the Beetlejuice house logo painted on the side of the Warehouse. The Beetlejuice theme would also play in the queue. Guests would enter the house through a door in the picture.

Entering the house, guests would walk up a series of ramps surrounded by fences and other decorations. Colorful lights would shine on the ceiling, and Beetlejuice could be seen standing on a large podium with a giant B on it. He would taunt guests and occasionally start a trigger which shined a spotlight on him as he said "It's showtime". He also had a trigger which activated a green smoke effect. Walking under his podium guests would enter the Revolving Tunnel, which was decorated with black and white spirals. Various voice clips from the movie could be heard here, including Barbara saying Beetlejuice three times, Otho chanting the exorcism ritual, and Lydia saying "My whole life is a darkroom".

Exiting the tunnel, guests would be startled by a blast of green fog coming from the floor as Juno jumps out of a boo-hole on the left. Guests would then descend into the Afterlife via a series of ramps through a hall of oddly shaped doors. Going down one of the ramps, guests could see the Road Kill Man moving along a line on the left. The Skeleton Typist could also be seen next to him. Guests would then enter the Waiting Room of the Afterlife, where they could see many chairs with corpses sitting on them. These include Ferndock, the Sea Diver, the Camper, the Open Heart Surgery Patient, the Magician's Assistant, Harry the Hunter, and Char Man. Handbooks of the Recently Deceased were scattered everywhere, and a turnstile rotated constantly in the back. Miss Argentina would jump out at guests from behind a desk.

Passing by a door with a large tentacled creature trying to break through, guests would enter a room with a very long hallway in front of them and a far away door. On the left, guests could see a window with the shadow of a man pulling a pencil out of his head on the other side. There was also a sign that said "Will Return in 364 Days". One of the dead Football Players jumped out on the left. Exiting the room, guests would be startled by a door sliding open revealing the Janitor. He would lead guests into the next scene: The Lost Souls Room. The Lost Souls room was covered in oddly shaped doors painted in a strange blue light. Two Lost Souls would jump out at guests in this room. At the very end, guests would see a door moving closer to them.

Guests would then enter the Maitland's Attic. Barbara Maitland would jump out at guests making ghostly noises while covered with a bed sheet. Guests would then pass by Adam Maitland's model of Winter River. At the end of the room, guests passed a television playing the Betelgeuse commercial. Behind the television, guests could see a figure of Adam Maitland, who was also covered in a bed sheet like Barbara. The figure would slowly move up and down. After turning the corner, Lydia Deetz would jump out at guests and say "I myself am strange and unusual". Guests would then turn the corner into a short dark hallway with a blinding green light before entering the model.

Once guests entered the model, they would see the grave of Betelgeuse along with the famous light up sign. Beetlejuice would then jump out at guests wearing his guide hat. After guests turned the corner, Beetlejuice would jump out again from inside a crypt. Guests then passed under an archway and approached the entrance to Dante's Inferno Room. Before guests entered, Beetlejuice would jump out for a third time, this time with spikes coming out of him. Once inside Dante's Inferno Room, guests would see the shadow of Beetlejuice spinning his head and making snakes pop out of his face through a window. An Inferno Girl would then walk out in front of the window. Guests would then walk out of the Inferno Room and into the Deetz's house.

As guests entered the house, they would find themselves in a room with Delia Deetz's sculptures. Barbara Maitland would also jump out at guests in her distorted form. Guests would then enter the upside down dining room for the dinner scene. Harry Belafonte's "Day-O (The Banana Boat Song)" would play inside of the room. The Shrimp Hands from the movie would reach down at guests from the table on the ceiling. The body of Beetlejuice's snake form could be seen at the back of the room, with his tail rattling at the very end. As guests exit the room, Beetlejuice's snake head would pop out at guests before they passed by Adam Maitland in his distorted form.

After guests turned the corner, they would pass by a table with Barbara and Adam's wedding dress and suit. Barbara's dress would rise up from the table with a green glow, and a decayed Barbara would then jump out at guests wearing the dress. Guests would then enter the next room, which had walls with "Test your strength" carnival games. The dangling feet of Maxie and Sarah Dean could be seen coming from the ceiling above the two games. Guests would also see Beetlejuice in his carnival form, and a scared Otho would jump out next to him. Spotlights on the floor would repeatedly flash on Beetlejuice and Otho. Guests would then turn the corner and enter the wedding scene.

The Fly (From The "Beetlejuice" Soundtrack)

Showtime! (From The "Beetlejuice" Soundtrack)

The Wedding (From The "Beetlejuice" Soundtrack)

Jump In the Line
Add a photo to this gallery 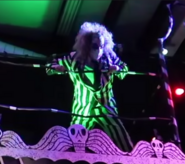 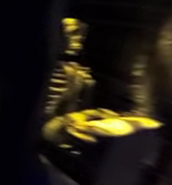 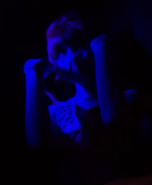 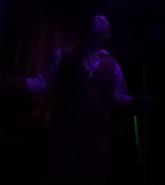 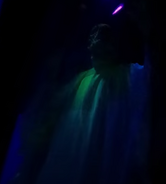 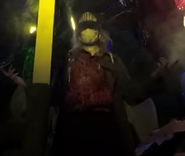 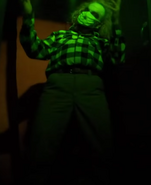 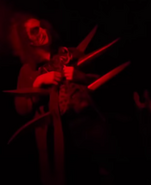 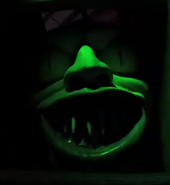 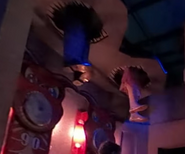 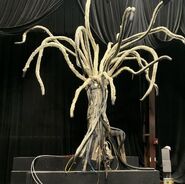 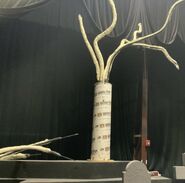 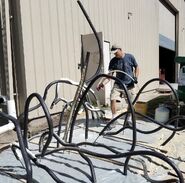 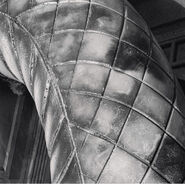 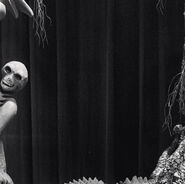 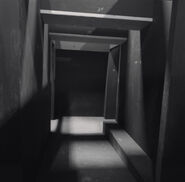 From nmpaintings
Add a photo to this gallery

Retrieved from "https://halloweenhorrornights.fandom.com/wiki/Beetlejuice_(Haunted_House_Orlando)?oldid=106879"
Community content is available under CC-BY-SA unless otherwise noted.