Asylum in Wonderland 3D was one of the nine haunted houses that were featured during Halloween Horror Nights 25. It was located in the Shrek Theater and was based off of Alice in Wonderland.

On August 27th, 2015, Universal announced that a 3D haunted house based on an evil version of Alice in Wonderland would be featured at that years event. The house would be a semi-sequel to the 2008 scarezone, Asylum in Wonderland. The team had decided throw everything that was in the scarezone into the house and involve the 3D technology they had been using recently at the time. The codename to this house was "Party", a reference to the Mad Tea Party scene.

The house would be the first located in the Shrek Theater. The houses put in this location would be built within the second, less-used theater for the Shrek 4D attraction.

A 3D haunted house would return the following year with Lunatic's Playground 3D: You Won't Stand a Chance.

Follow the white rabbit through the looking glass and into a murderous 3D Wonderland. Is this world all in Alice's mind or are the images we see real enough to kill us?

The facade was a giant comic book that says "Asylum In Wonderland" with a small doorway on the bottom.

After walking through the comic book guests entered into a room where The White Rabbit would jump out with his pocket watch. After that, you enter through the revolving tunnel which symbolizes the rabbit hole. Then, you go into a room that looks like an outdoor garden with flowers on the wall and Dodo Birds jumping on trampolines on both sides of the room. After that, you go into a room with flashing lights lining the walls. The Caterpillar on a mushroom appeared on the ceiling of this room.

Continuing down the room you will see two Tweedle Tweaks behind some of the lights. Then, you enter a room with what looks like book pages on your left and right, as Alice pops out from behind the pages. After that, you go into another outdoor themed area with plant monsters with mouths for hands. You would then go to The Mad Hatter's tea party where you see The Mad Hatter walking on the table with the corpse of The March Hare laying on top of it. Further down the room, a man getting electrocuted pops out.

After that, you enter a room which features many guards of The Queen of Hearts dressed in checkerboard outfits. Some of them are statues and some of them are real people that will jump out. The next room features The Queen of Hearts sitting on her throne. Afterwards, you travel down a long hallway where you see a man with a head on his chest at the end of it. Then, you go through a much darker corridor where disembodied heads fly at you. After that, you end up in a room in an asylum where The Mad Hatter pops out and you could see Alice sitting on a bed. The final room shows Alice getting killed by The Queen of Hearts. 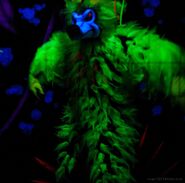 The Queen Of Clubs 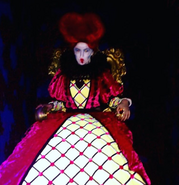 The Queen of Heart 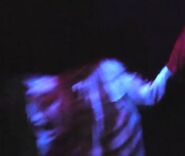 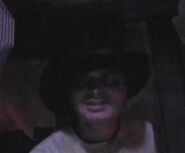 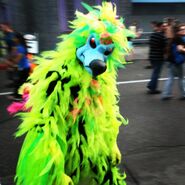 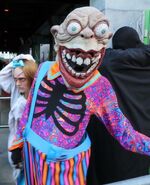 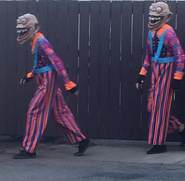 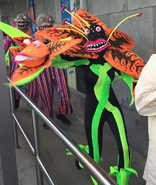 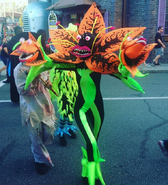 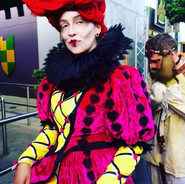 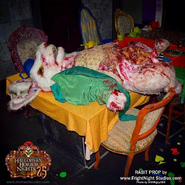 Image from FrightNightStudios
Add a photo to this gallery

https://www.youtube.com/watch?v=62olLIHEUWo - Audio Recording of the house

Retrieved from "https://halloweenhorrornights.fandom.com/wiki/Asylum_in_Wonderland_3D?oldid=108376"
Community content is available under CC-BY-SA unless otherwise noted.