On July 24th, 2012, Universal announced that a haunted house based on the legendary rock star Alice Cooper would be coming to Halloween Horror Nights 22. This was due in part to the immense popularity of the Alice Cooper haunted mazes in Hollywood. The house would mainly be focused on Welcome to My Nightmare, but would also feature many other songs from his other albums.

Journey into the legendary rocker Alice Cooper’s twisted mind and witness the natural melding of horror and Cooper’s four decades-long career. Here you will follow Steven, the iconic character from many of Cooper’s works, as you come face-to-face with a myriad of tormentors who threaten an already-decaying sense of sanity.

Face your demons in legendary rocker Alice Cooper's twisted mind and bear witness as horror and music become one.

Alice Cooper music would play throughout the queue. In front of the entrance to the house, Alice Cooper's head was built with the words "Alice Cooper" in front of it. Guests would enter the house through the facade's mouth.

As guests enter, they were transported into an asylum hallway covered with chains and mattresses blocking the path as two inmates attacked from both sides. There was writing on a wall that said "It's feeding time!" as guests left the room. Guests would then enter a hospital room of some sort, where Nurse Rozetta drew blood from her latest victim on a slab. She reached out to attack guests as they rushed into another hallway, which featured writing on the left wall that said "YOU TRAP, YOU KILL, YOU EAT, THAT'S WHAT A GOOD SPIDER DOES!". This served as a transition into the Black Widow's Lair.

As guests entered the room, they would notice flashing lights and spider-webs everywhere. Guests would see the Black Widow Spider's seductive side growling and screeching at them. Her more ravenous, spider-like version of herself lunges at them while they were distracted as they rush into the next room. Guests would then find themselves in Steven's house. Steven could be seen as a static figure with his flashlight clicking on and off hiding under a cabinet while guests are attacked by his Steven's Mother and Father.

Guests would then quickly enter a brick wall hallway with a sign that said "Vincent D. Funier Memorial Stadium". As they walk by, they found themselves under bleachers and are subsequently attacked by a Bully scareactor wearing a mask donning Alice Cooper's signature make-up. Next to him was a hanging body with a bag over their head and sign on its body that said "FREAK". While distracted by the Bully, guests would then be ambushed by a Cheerleader scareactor wearing the same mask as the bully. Guests entered the next room, which had a continuous brick-wall on the left with "SCHOOL'S OUT!" written in red writing. As they continued, guests walked down a hallway of some sort of church with scareactors blended in with mannequins. As guests got one last scare from a man in a white tank top donning Cooper's makeup, guests saw an altar-like wall frame of Cooper's eyes.

Quickly moving into the next room, guests would see flashing lights and many corpses. A Stripper could also be seen dancing on a pole. As guests leftg the room, they found themselves walking down a hallway. On the right, there was writing on a wall that said "You're Poison" . As they continued down the hallway, they came face to face with Alice Cooper performing surgery on a victim. Guests would then rush through another hall of mattresses and chains as they were chased by inmates once again. Flashing lights blind guests as inmates come from all sides. Alice Cooper in a straight jacket attacks guests, and one last scare for Cooper in his showman attire beckoned to guests as they run out of the house. 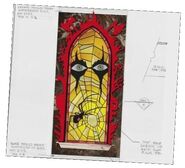 Alice Cooper Welcome to My Nightmare House T-Shirt [From HorrorUnearthed] 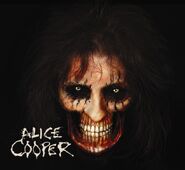 From HHNCrypt
Add a photo to this gallery

How You Gonna See Me Now

Is It My Body

I Am Made of You

I'll Bite Your Face Off

Something to Remember Me By

I Gotta Get Outta Here

Nothing's Free
Add a photo to this gallery 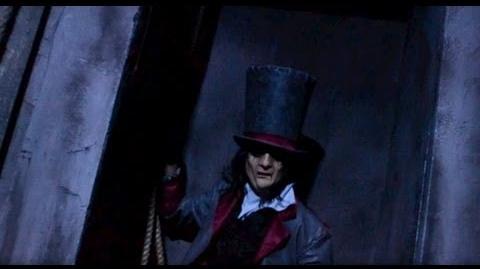 Alice Cooper Haunted House Walkthrough
Add a photo to this gallery
Retrieved from "https://halloweenhorrornights.fandom.com/wiki/Alice_Cooper:_Welcome_to_My_Nightmare_(Orlando)?oldid=117335"
Community content is available under CC-BY-SA unless otherwise noted.