Afterlife: Death’s Vengeance was one of the eight haunted houses that were featured during Halloween Horror Nights 23. It was located in Sprung Tent 2.

On August 30th, 2013, Universal announced that an original 3-D haunted house based on the afterlife experiences of a serial killer named Bobby "The Blade" Galletta would be featured at their Halloween Horror Nights event that year. The house would bring guests through the afterlife, where his previous victims would seek revenge on him.

Another 3-D house would be featured two years later, with Asylum in Wonderland 3D.

Serial killer, Bobby “The Blade” Galletta, is about to meet Ole’ Sparky. 2000 volts are going to send him into a horrific realm of pain and suffering. His victims are bound to turn Bobby’s afterlife into an unimaginable and infernal torment.

Serial killer Bobby “The Blade” is about to meet Ole’ Sparky. 2000 volts are going to send him to a horrific realm of pain. His victims have waited an eternity for vengeance. They’re bound to turn Bobby’s afterlife into an unimaginable, infernal torment.

Serial killer Bobby “The Blade” is about to feel 2000 volts of terminal electricity as his victims in the afterlife wail to seek horrific vengeance upon him.

As guests approached the sprung tent, they would be able to see the facade for the house. The facade included police cars and a group of newspapers detailing the capture of Bobby, which guests would walk through to enter the house. 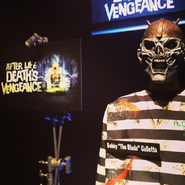 Retrieved from "https://halloweenhorrornights.fandom.com/wiki/Afterlife:_Death%27s_Vengeance?oldid=114223"
Community content is available under CC-BY-SA unless otherwise noted.