"You are all my children now!"

A Nightmare on Elm Street: Dreamwalkers was one of the eight haunted houses that were featured during Halloween Horror Nights: Carnival of Carnage. Based on the New Line Cinema horror series, A Nightmare on Elm Street, the haunted house brought guests into the twisted dream world of Freddy Krueger. Located inside Soundstage 23 along with Psychoscareapy: Home for the Holidays, the house featured movie scenes from throughout the series.

In 2007, Universal made a deal with New Line Cinema to bring three of their most famous horror movie monsters to their Halloween Horror Nights event. One of these monsters was Freddy Krueger. For his house, Universal decided to create their own story set in the Nightmare on Elm Street World. The house would be titled A Nightmare on Elm Street: Dreamwalkers and would also feature many famous scenes from the franchise.

The house would originally have a scene with Jason Voorhees in it, but New Line Cinema said that this would not be allowed because they did not want any rumors spreading of a Freddy vs. Jason sequel.

The house would be one of two located in Soundstage 23, the other one being Psychoscareapy: Home for the Holidays. Soundstage 23 is one of the larger soundstage facilities designed to be used as filming locations for movies and television shows.

The house would prove to be very popular and would even go on to win the House of the Year award in 2007. The character of Freddy Krueger would not reappear at Halloween Horror Nights Orlando until the 2015 haunted house, Freddy vs. Jason.

Freddy Krueger chases you through 1428 Elm Street in a nightmare you can't wake up from- because you are already awake!

Welcome to 1428 Elm Street. Trapped in a walking dream state by a new sleep-enhancing drug, Freddy Krueger chases you through vicious nightmares you can't wake up from- because you're already awake.

On the backstory page, guests could see 1428 Elm Street in a dilapidated state. By clicking on its front door, guests would be transported to the house when it was in its prime. A commercial for Sleepwell would play in the background as quotes from the commercial would pop up on the screen. Clicking on the front door again, guests could see Freddy creating his finger knives. After that, an alarm sound would go off and guests would be transported to the description page.

On the carnival page, guests could click on a Sleepwell truck to see a bottle of Sleepwell on a desk. Clicking on it would transport guests to a page with the pieces of Freddy's glove. Guests would have to click on the pieces of the glove in the right order to assemble it. Doing so would allow visitors to see a short preview of the house. Guests could also see the town of Springwood labeled on a map, an open bottle of Sleepwell, Nancy's sophomore yearbook with an autograph page, and a cassette which would play a short audio clip when clicked on in Jack's bus.

Images from the Halloween Horror Nights: Carnival of Carnage website until otherwise noted.

Image from the now defunct Horrornights.be.

Image from the now defunct horrornights.be.

HHN 17- "A Nightmare on Elm Street- Dreamwalkers" House Preview
Video that played when the carnival puzzle was solved.
Add a photo to this gallery

Music that played on the backstory page and on Jack's bus: Main Title (A Nightmare From Elm Street) (0:00-0:20)

Audio that played on the backstory page after clicking the front door:

Audio that played on the backstory page after clicking the front door a second time:

Audio that played when an incorrect part of the glove was clicked on:

Audio that played when the puzzle was solved:

Audio that played when cassette tape was clicked on in Jack's bus:

The queue video was a commercial for Sleep-Well, a drug created from Hypnocil. Hypnocil, in the movies, was used for dreamless sleep to protect the children from Freddy's nightmares. The commercial claimed that the correct blend of Hypnocil would allow patients to experience dreams and Freddy's nightmares in safety. The only indication that anything was wrong with Hypnocil was that Freddy would periodically pop into the commercial with a maniacal laugh.

Guests entered the queue to this haunted house in between the Twister ride and The Boneyard, right in front of Soundstage 22. The queue would go across the front face of Soundstage 22 towards Soundstage 23. The line would loop a few times around the wall of Soundstage 23, which showed a queue video advertising the Sleepwell drug (with Freddy interrupting periodically).

Entering the house, guests first walked into a Sleep-Well tent. Fliers and posters surrounded the room advertising the effects of Sleep-Well. Mannequins wearing Sleep-Well suits and gas masks stood behind tables, while a saleswoman, obviously gone crazy from overuse of the drug, led guests towards a tunnel of Sleep-Well mist, sending them into the dreamworld.

Reaching the end of the mists, guests emerged into Freddy's world. His house, 1428 Elm Street, loomed in front of the path, left abandoned and decrepit. Surrounding guests were the sounds and cries of Freddy's young victims. Continuing on into the house, guests were first greeted with a young girl. She pushed her teddy bear into guests faces as they turned past the front door into the house.

Walking through the house, it seemed as if it were about to fall apart. Windows were boarded and floors creaked as guests walked over them. Guests next entered a bedroom scene from the original film. In the scene, Glen Lantz (which was Johnny Depp's first movie role) was pulled inside of his bed to be killed by Freddy. In order to make guests feel as if they too were pulled into the bed, the room was turned on its side. Seeming to walk from the ceiling, a large bed stood at the end of the room for guests to walk through its sheets. On the wall next to the bed was Glen's distorted body. On the other walls were bookcases, posters, and a television. Periodically Freddy's image came onto the television and as he distracted guests, one of his victims dropped down a hidden door on the wall to startle guests walking past.

Emerging through the sheets, Freddy immediately attacked guests. The path continued on through dark corridors where Freddy's victims and his adversaries from the films lurked, including a girl who was killed inside of a television. As lights flickered, victims popped out of the walls and appeared in the way on paths to scare guests. The path finally led to a hospital ward, a scene from the sanitarium in Freddy vs. Jason. Children asleep in comas surrounded the paths while a screen monitored their vital signs. Sheets separated all of them, and allowed Freddy to jump out to scare guests unseen. Every few minutes, the children suddenly sat up in the bed, alarms blared, and Freddy's face appeared on their monitors.

Leaving the ward guests were surrounded by mirrors. In the hall of mirrors the path was difficult to find and flickering lights kept it dark for much of the time. Some mirrors were doors which opened to reveal Freddy and his victims popping out to scare as guests walked past. Reaching the end of the mirror hallway, hot air greeted guests. They entered Freddy's boiler room, where he brought his young victims to kill. As hot air blew from below, Freddy attacked guests on a high platform. Walking further into the boiler room, chains hung down in the path blocking the way as Freddy chased guests. Freddy appeared on all sides of guests throughout the whole room and finally chased guests out of the house.

This is an attempt to extract the text from a part of the treatment (pic below):

The second alcove is on our left and is the (?) of a jail cell. Hanging inside from a bloody fabric sheet id the dangling body of Rod Lane.

The third alcove features a bloody marionette victim. His arms and legs have been sliced open and his arteries (?) bloody strings that suspend him from above. He cries out at us in agony as he if forced to dance (?) puppeteer above.

"Welcome To My New Nightmare!"

One of the dummies in the Sleepwell tent. 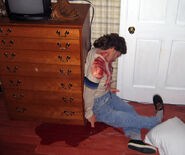 Image from Universal Orlando Resort
Add a photo to this gallery

Retrieved from "https://halloweenhorrornights.fandom.com/wiki/A_Nightmare_on_Elm_Street:_Dreamwalkers?oldid=119460"
Community content is available under CC-BY-SA unless otherwise noted.